Connecting an ASR33 Teletype to an ESP32

As you know, I now have a working ASR33 teletype (see here for notes on restoration). Even though a few more bits to do, notable the case, I decided now was the time to do something with it.

Getting the teletype, and getting it working, were just pure nostalgia, as I used one in secondary school. I had not thought a lot about actually doing something even vaguely useful, let alone fun, with it. But I had made a few assumptions.

One thought was a simple linux terminal, so connecting the teletype to a Raspberry Pi, for example. Of course, the slowest ever game of space invaders was not really a consideration :-). 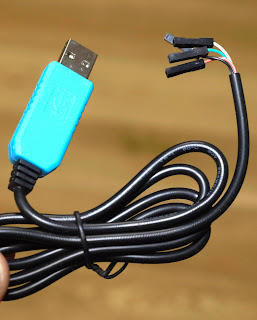 Internally computer components normally work with binary, 1s and 0s, and these are represented as a voltage relative to a "ground". So typically 0V is 0, and operating voltage is 1, e.g. 5V, or 3.3V. Some modern chips use a variety of different voltages in different places, but the principle is the same.

I'm sure you have all heard the song, no? Anyway, the serial interface of choice, when I was growing up, was RS232. So you need a way to connect the internal working of a computer system to RS232. This involves driver chips.

RS232 actually works with voltages (relative to ground) that are +12V or -12V, though modern variants use +5V and -5V or even less. The original specification allowed for quite a wide range of voltages to be valid.

Connecting something like a Raspberry Pi to RS232 simply involves getting an appropriate USB adapter. Easy. 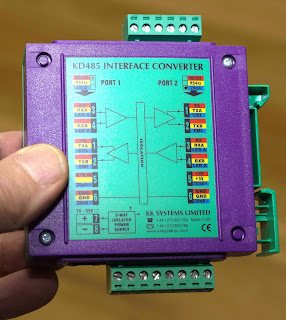 However, the teletype uses an older standard called 20mA current loop. Instead of ground and a voltage this uses a pair of wires (- and +) which either generate 20mA or nothing to represent the binary values. The advantage of this is that no matter how long the cable you have, if you put 20mA in one end, you get 20mA out the other. That is how current works. It does mean long cables need quite a high voltage at the start (voltage does drop over distance on a long cable), but if you can apply the necessary voltage to feed 20mA in at one end, then you know the far end is getting 20mA, and the signal is getting through.

Sadly it is not so easy. For a start, the interface box (which is over £100) needs a power supply, so I need you get some sort of DC plug top power supply for it. This is to source the 20mA to send to the teletype.

However, it is worse, it turns out the teletype does not send 20mA anyway. It expects you to provide a 20mA current source which it "switches" on and off. So I would need a second 20mA constant current supply for the teletype so it can feed 20mA to the adaptor which turns it to RS232 which I then feed in via USB to a Raspberry Pi.

This is getting expensive and messy.

Tech that is 55 years apart

An alternative idea, now that I have played with ESP chips, is to connect to an ESP32 to make the teletype WiFi connected allowing a lot more flexibility.

The technology I am playing with here is around 55 years apart. The teletype is using a 1963 version ASCII typewheel which dates it probably before 1965, as the 1965 typewheel has underscore instead of an arrow. The ESP32 came out last year. So yes, 55 years apart, and yes, as old as me, which is scary!

So really. how hard will it actually be to glue these two together?

I mean, this is really old technology one side, and really new technology the other. Nothing was even close to using 3.3V back 55 years ago, it was not even using 5V TTL from what I can see.

So really, how hard could it possibly be to connect them up?

The answer is this!

Sending data to the teletype... 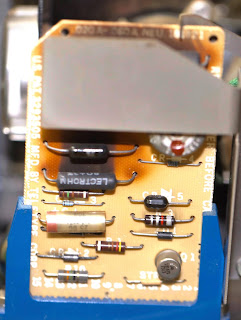 The input to the teletype just wants 20mA or not, and it does not matter that the ESP32 only generates a mere 3.3V. By feeding through a 100Ω resistor I measure 2.2V drop which is 22mA, which is fine. The printer has this going in to a transistor (Q1) which drives another power transistor which switches power to the solenoid that drives the selector which works the mechanical clocking in of the data to the print (and punch) mechanism.

So it turns out that 3.3V output GPIO pin on ESP32 to 20mA current loop needs literally nothing more than a 3p 100Ω resistor, that's it, magic.

The ESP32 is then quite happy to be configured to 110 Baud 8 data bits and 2 stop bits and that just works. (Yes, the ASR33 is technically even parity, but actually the machine ignores parity. You actually want clean 8 bit if you want to print space invaders on the paper tape punch as I have yet to see even parity space invaders).

But what about the other way - data from the teletype?

The answer to that is actually even simpler. I know, how could it be, but it is. The teletype is designed to "switch" a 20mA current source, which means internally it is just a electrical contact that goes on and off (via a distributor) to send the serial data.

This is what the keyboard contacts look like. The wires are pushed out in a pattern by the bars that the keys work, and they contact a bar at the bottom, or not, in a pattern for the data bits to send. 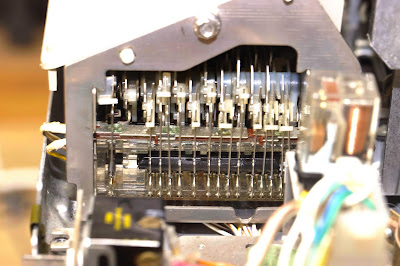 And this is how those are clocked out. Each of the contacts from the keyboard are on the outside, and connect in turn, clocking a start bit, 8 data bits, and 2 stop bits. The keyboard itself generates the even parity for the keys pressed. 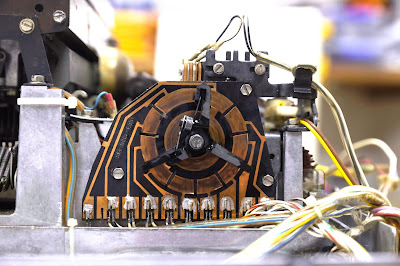 But at the end of the day it is two wires that work like a push button, and so one connected to GND and one to an input pin with configured pull up, and you have input data to the ESP32!

You do have to connect to the right pins, else you end up putting 80V or so up an ESP32 pin and releasing the magic smoke, and you don't want to do that, or again, or again, arrrg!

The ESP32 settings also, rather handily, allow it to have the input inverted, which is necessary when wired like that. You also need to tell it to give you one character at a time as UARTs are typically going a lot faster and you expect to get several bytes at once. Once set up, it was then easy to make a local echo sending the typed key back to be printed as you type.

I can connect to the screw terminals at the back. And then fit it all in the case nice and tidy, and we have a WiFi MQTT connected ASR33 teletype! 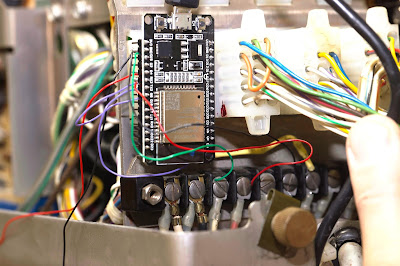 The ESP32 is connected over WiFi to MQTT where I have commands to send raw 8 bit data, or lightly cooked text (sends even parity for the sake of paper tape; adds carriage return to line feed; wraps at 72 characters; and blats any smart arses trying to send UTF-8 emojis to print an up arrow instead). It also allows sending key presses back raw (i.e with parity, so allows all 8 bits from paper tape), as well as line buffered (stripping parity). All in github for your amusement (here).

I have also put a Sonoff Basic (Tasmota) in-line to the main power, so the ESP32 can turn the power on and off over MQTT automatically when it wants to print.

I then have a simple script to handle incoming SMS on a number and send to the ASR33 via MQTT. Works a treat! The printer powers up, prints the message, and the powers down.

One more step planned, seeing as it can only print upper case, is to make it print tweets from the (soon to be ex) president of the United States. Seems appropriate some how. (update: I did it! here)

Here's a video of it working...