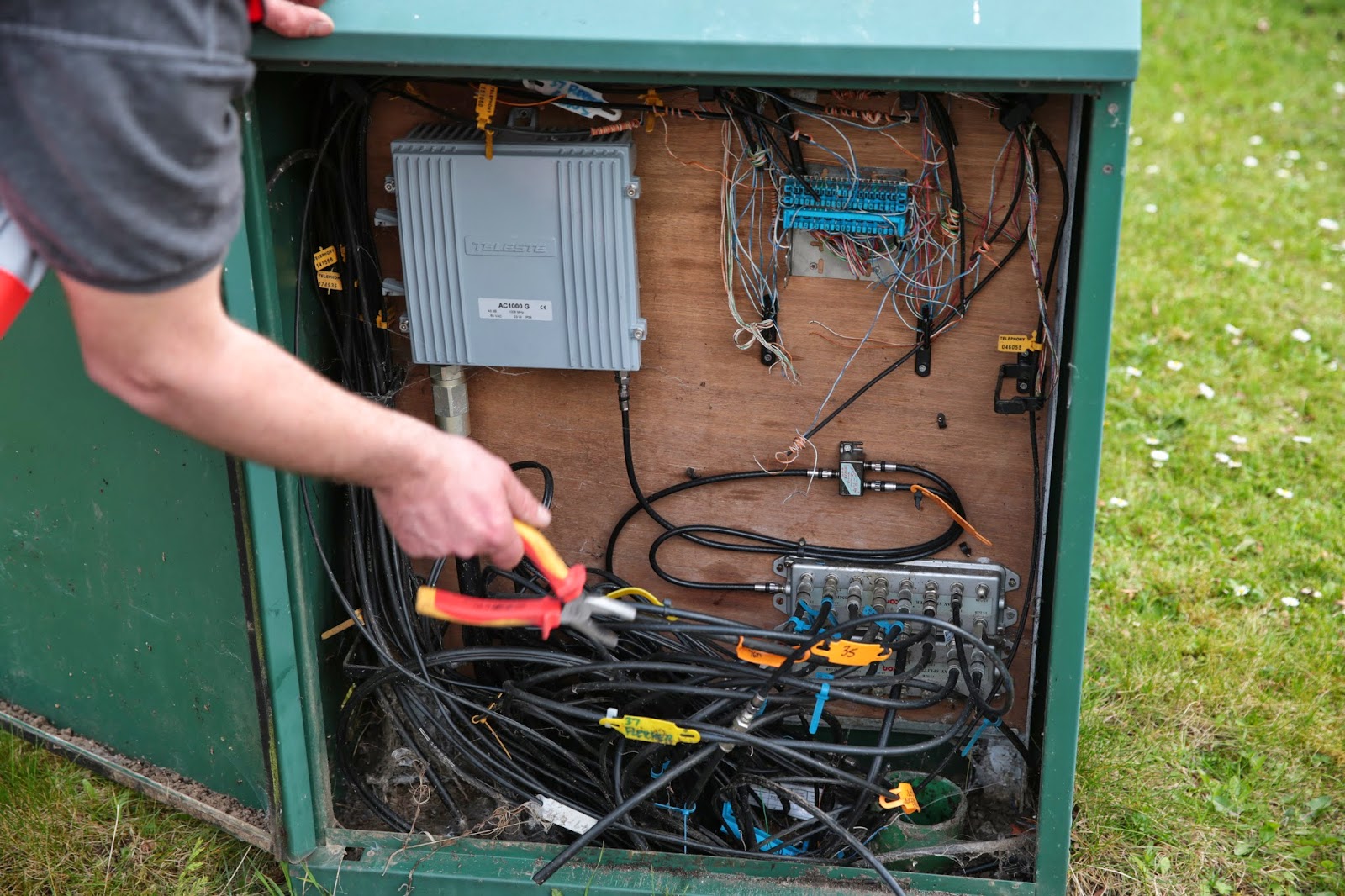 As anyone that has been reading my blog for a while will know, the whole area of ADR (Alternative Dispute Resolution) is a tender subject. We (A&A) got hit with our one and only claim a few years back and it really upset me. Not the claim itself (customers being arses happens, sorry), it was the whole injustice of the whole process. The arbitrator (Otello at the time) agreed with me that there was no breach of contract, so we won the ADR, but we had to make a good will payment and write-off perfectly valid ongoing charges that were not (and could not have been based on the dates) part of the dispute. It was like a judge saying you win but you pay the loser, and made no sense. It hurt. It was very very demoralising and upsetting. The fact we paid for the ADR added insult to injury. The process was, and still is, incredibly bad and no way to "resolve disputes". Sorry, even now this stings.

However, recently, the opportunity came up for me to see ADR from the other side. Actually, a few opportunities.

2. Apple provide a telecommunications service (iMessage), but have no ADR. OFCOM simply cannot get their head around that as well as being an equipment manufacturer they also provide a telecommunications service to UK residents by direct contract with them and so are legally required to have an ADR. Sounds like we should use OFCOMs arguments back to them and make a VoIP carrier that does not have ADR.

3. Virgin line installed at my home (for reasons to do with stuff I am donating to ORG) but it makes me a residential customer of Virgin in my own personal capacity. Bingo, now I have a case for ADR.

But obviously I need an actual dispute. I did not have to invent one - there was a clear case to dispute. Indeed, I had three clear issues...

a) The install was not at the agreed time - I had to take an extra half day off work. They said sorry but offered no compensation. (note: A&A make a point of not guaranteeing install dates - Virgin did not).

b) Their customer service agent told blatant lies and refused to reply to my written complaint by letter. He insisted twisted pair is the same as coax. He insisted there was no ADR. He insisted that they did provide "fibre optic broadband".

Now, I appreciate words and phases change their meaning over time. "broadband" has annoyingly changed from "using a wide band of RF spectrum" to "Internet Access". I don't think "Fibre optic" has changed from "uses actual glass fibre and light" to "very fast" yet, but I did quote from their web site where they define fibre optic: "It’s made from strands of glass as thin as hair, which carry information by light.". So there was no re-definition of the term here.

However, what they supply is copper coax.

So, I took them to ADR (after complaining several times and being told that there was no ADR). It was filling in a form on their web site and a few emails. Simple. Too simple, in fact. It has to encourage bogus complaints!

Now, Virgin had the chance to sort the dispute (and pay a lower fee, but still pay a fee, if I agreed it was resolved). Oddly they did not simply offer me cash of less than the full fee to close the matter. The problem is that they kept saying how they provide service - with fibre to a cabinet and coax from there, and does that explanation resolve the complaint? Well, no, it did not, as they still claim to be selling "fibre optic broadband", and their explanation is that they do not. It made no sense that they would think that would be a resolution. It was like they had some sort of mental block.

The whole issue with the delayed install had not been refuted by Virgin. It was part of my complaint. Virgin did not even mention it in their defence. But the final arbitration said I did not provide any evidence so they ignored it! Well "my word" is the evidence and them not refuting my word means that the arbitrator should have agreed with me. There was no coming back to me saying "do you have any evidence?" of which I have plenty by way of a letter from virgin and lots of time-stamped pictures. No, they just ignored it. They did not arbitrate a resolution to the dispute at all on that point!

The final ruling was that virgin had to apologise, which is good. Interestingly, the ruling states :-

"I am therefore satisfied that the company's documentation is consistent with a FTTP service as its letter is explicit in that fibre optic cables are run to a customer's property, and its description of the fibre product on its website is wholly inconsistent with the use of copper cabling from the nearest connection point (such as the company's cabinet)."

Now, lets just read that again, to be clear to the ASA, Virgin's marketing department, Trading Standards, and anyone else reading this - an independent qualified arbitrator, paid for by Virgin, has stated "[Virgin's] description of the fibre product on its website is wholly inconsistent with the use of copper cabling from the nearest connection point (such as the company's cabinet)." Just let that sink in for a moment here.

They were ordered to apologise, but specifically to me, not in general.

It is also interesting that Virgin claim that all its street cabinets are served by fibre, and I am pretty sure mine is not. See picture at the top. They also quoted an old OFCOM glossary that defined FTTC "fibre" as copper from nearest street cabinet, which does not look to be the case for me or anyone in my street.*

Virgin did, finally apologise, but only to me, see below.

Even so, I did not feel happy that ADR actually made any real effort to work with both sides to resolve the dispute properly. It was submit some stuff, and decide. No questions, no clarifications, just done and dusted for a £300+ fee (paid by Virgin). In contrast I have used the county court arbitration service which is a series of phone calls for up to an hour, and that was much more sensible and productive. So even using this as a user, and winning, I still feel ADR is bad, and should be scrapped. 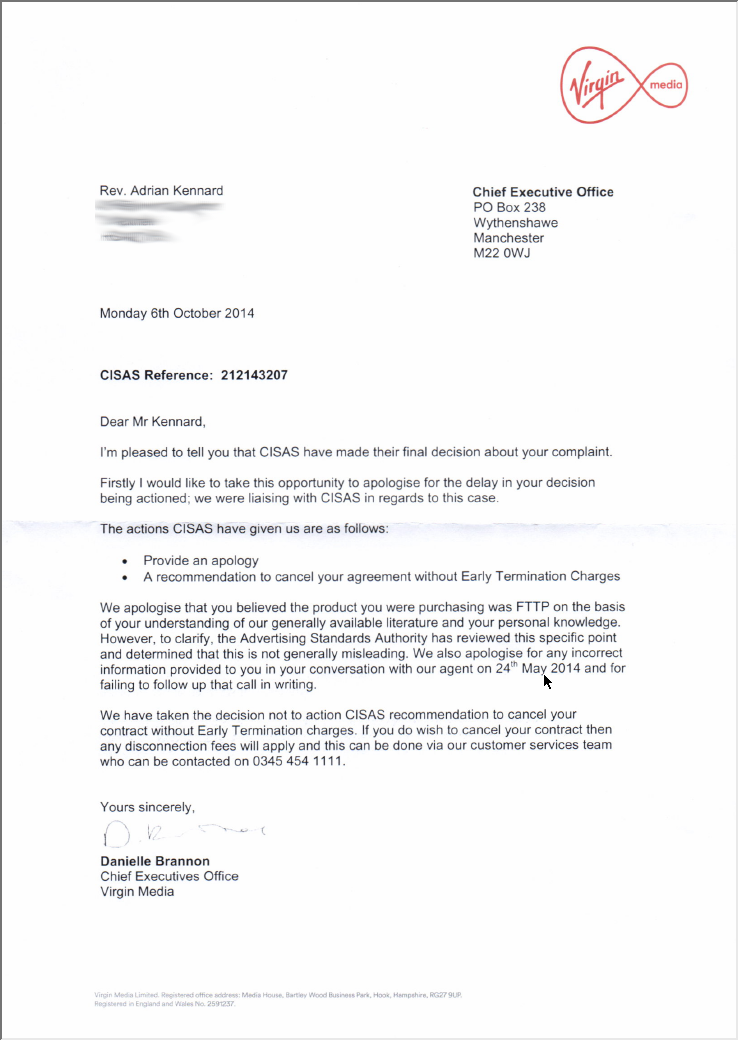 I will, once again, reiterate that the Virgin service does indeed seem to be a pretty good cable Internet service. It does a good job at a fair price. Just a shame they feel they have to tell porkies to sell it.

* The kit shown in that picture can, apparently take a fibre - so I cannot say for sure that it is not a fibre node. However, other Virgin correspondence did say fibre to the "Main node", so I seriously doubt it.
at October 08, 2014