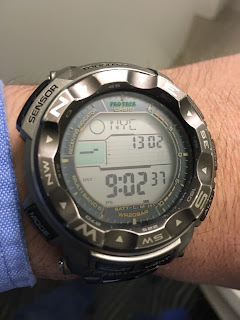 I really don't know why we have Daylight Saving Time - it just causes hassle, and does not do anything useful - we have plenty of daylight in the summer, and we move that daylight around (relative to when we work) by an hour. Makes no sense at all.

But we did have slight fun yesterday flying from Texas to New York. The problem being that we were not sure if they were different time zones or not. Yes, googling would have worked.

Of course, all of the iPhones and Apple watches switched and advanced an hour. But my Casio watch insisted it we the same time. This would have been fine if not for a clock on the wall at the hotel telling time in New York, Paris, Tokyo, etc, which agreed with my watch! It was the only clock we could see in the hotel. We ended up having to ask someone the time to be sure.

The problem - bloody daylight savings time. On my watch I adjusted the world time until it matched where we were in Texas, and it said "NYC", so I assumed time zones must be the same. What I failed to spot is that the "DST" setting needs to be adjusted manually as well (per time zone). Had I done that I would have realised I needed to set to some other time zone "CHI"? So when we got to NYC it was saying the wrong time but claiming to be "New York City" time. Of course, the "DST" indicator is not obvious when "un lit" so the mistake is not obvious.

What is worse is that it has the UK time wrong as well. It had DST set to AUTO, which works perfectly when in the UK, but does not switch DST based on the "rules", but on the radio signal (which it cannot get whilst here in US). So I had the local time set a hour back and the UK time an hour forward on a watch that normally "just works".

To add to the fun, in New York, it is still DST until this Sunday, but not DST in the EU. Anyway, at least we are only 4 hours adrift from UK, not the 6 of when we landed.

I have finally managed to get my watch set right! Time for some breakfast.
Posted by RevK at 13:13:00