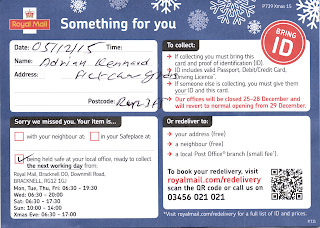 I am not happy.

I have a parcel coming - nothing that important, but I was hoping to have it Friday, and indeed it should have arrived Friday. However, it was not guaranteed, so I'll let them off with that.

On Saturday I got a card. This was odd because I was at home most of the day and James was at home all day. The postman clearly did not knock.

The card states that the item is "being held safe at the local office, ready to collect the next working day" and lists times, including today (Sunday) as a working day 10:00-14:00.

I went to collect - it took half an hour even though only two people ahead of me, one of which was told they could not find his parcel!

I was told the item is not back at the depot. They say the card was left at 14:45, and the office closes at 15:00 so probably on the van still or something, and tough!

This is odd - as the card was left long before 14:45, and the card clearly shows the office was open until 17:30 on Saturday, not 15:00, so clearly I am being told lies. Indeed, so far I count 4 lies from the Royal Mail, and a waste of over half an hour of my time.

What is the deal with ID?

Normally the only credentials you need to accept a delivery, even if signed for, is to be in the right place at the right time - i.e. at the door when the postman arrives. There is no check of ID or even name, just that the item is handed to someone at the address.

But when collecting you need ID. Well, if you did not have the card I could understanding wanting some proof that you are someone living at that address, such as a driving licence matching photo and address.

But when you have a card, the mere possession of the card proves you were in the right place just not at the right time. Had the postman arrived at a different time they would have been happy to hand the item to you. So why even check ID if you have the card.

What is also weird is they want to check your name, not the address. Normally your name is irrelevant, when delivered in person. No check is made on name. So you would expect that an ID showing a matching address is all that would be needed. But no, they want to check name, and do not care if address matches.

Also a bit odd what ID they accept. The card says the full list of ID is on royalmail.com/redelivery which is only true if you are not accessing from a mobile, as the mobile site does not list ID types! Passport and driving licence, being official documents, I can understand, but bank cards - they are just issued by a company, so why not any old company ID card. I did not get to try my company ID (which was accepted by the Home Office even) because they did not actually have the parcel. I'll try tomorrow.
at December 06, 2015