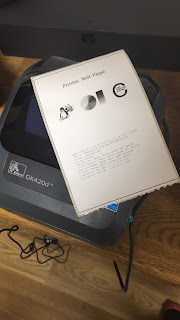 We make a lot of use of SmartStamp, thousands of pounds a year, as we use it for sending letters and parcels (routers, firebricks, etc) to customers every day.

It was quite a good system. When it started we reverse engineered the back end and integrated in to our systems. In a lot of ways this was superior to using any sort of franking machine:-

Basically the only disadvantage is that franking is usually a few pence cheaper, but the ongoing costs reduce that, and mostly we charge customers at cost for postage, so making no real difference.

However, sadly, for no apparent reason, they are stopping SmartStamp at the end of the year. So what next? Well, the good news is that Royal Mail have a postage API for parcels. This actually looks mostly sensible, but I am only just starting to look at this now - if I am crying in a corner later this week, you'll know why.

It does not look like this covers simple letters, so we may have to come up with a solution to that - I suspect just pre-paid C5 envelopes for now.

Anyway, for parcels, we'll need to do the labels, and they recommend this 4" wide thermal label printer. I was not that keen on yet another printer, but actually I think it may be a lot easier than putting labels through the big printer anyway, and Royal Mail supply the media for free (well, because you are spending on postage)! It is also nice and quick - just over a second to print a label.

I am going to integrate this API in to our linux based systems. I will need to print to the label printer from that system, which means ideally I want a printer that is Ethernet/IP networked and supports postscript. The label printer they supply is USB (or parallel or serial!), not Ethernet... Hmmm

Simple - try it on linux and see. Well, I am impressed. CUPS found it, recognised it, and only one option needed a couple of trial and error to get right. It just works from linux. So I set up a Raspberry Pi, installed CUPS, set up the printer and shared it, and then set up promote printing from the system that needs to print labels, and bloody hell it just works! As far as the system is concerned it has a networked postscript printer. 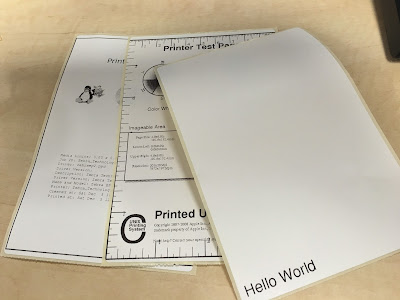 So, next step is testing the API and integrating with out systems - what could go wrong? I'll keep you "posted".
Posted by RevK at 13:46:00