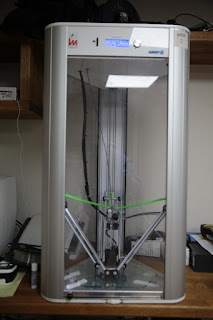 I saw a new 3D printer back in March, the Wasp Delta 2040 Turbo which boasts a speed of 1m/s which outpaces pretty much all of its rivals.

In November I got an email confirming that iMakr had one, and ordered. To be honest iMakr have been a nightmare - from dodgy card payment page on their site, to delays and more delays shipping (one excuse was DHL van in Italy had crashed). Finally it arrived on Monday and did not work - dead on arrive (tone and blank display). It has taken until Friday to get them to sort anything, and all they have done is confirmed it really is dead, and lent me the slow Wasp Delta 2040.

However, it has given me a chance to play - the only thing this model lacks as I understand it is the extra speed.

I have commented on the Makerbot Replicator 2 before, which I still see as the clear "plug-in and print" model of 3D printers, but the Wasp is pretty close to that. The first thing I printed "just worked". However, there is a lot more to tinker with in the settings on the Wasp.

But let's look first at the most obvious difference - the Wasp is a "delta" printer. This means that it does not have a conventional X/Y axis, which has a motor to move a gantry one way, and a motor on that to move the head the other way, and a Z axis (in the case of Makerbot, the print bed moves). Instead, it has three vertical drive threads which move three arms, allowing the head to position anywhere. It is defined as having a cylindrical print area 200mm across by 400mm high. This is smaller in width than the Replicator 2 which is 285mm x 153mm and 155m high. However, it seems the Wasp will print a larger area - the scope of the delta is more of a triangular shape, and I have printed items over 220mm wide. It also allows the head to go up to 445mm high in the centre (not as high at the edges). Of course the height means it is quite a big machine.

It also has a heated bed and glass print plate which works really well - surprisingly so. On the Replicator 2 I used blue tape on the acrylic print bed to avoid things being welded to it, and then always had to print a raft. Large items would bend on the bed. On the Wasp I can print things with no raft and they just work - well, with exception of things with a very small contact like dice on their corner - but for that you can print a raft. You use a glue stick on the glass to help ensure it sticks well.

Like the Replicator 2 it uses an SD card for the print files.

Unlike the Replicator 2 it does not come with any software - but they recommend using Cura or other free slicer applications which generate generic gcode. Cura seems quite nice (using on Mac), very fast, understands when you insert an SD and is one click save and then offers an eject button direct from the app.

The downside is that the slicer has loads of options. Unlike the Makerbot where its software is all set up for PLA printing, and offers basically fast or fine, Cura offers loads, and I struggled to find any sensible defaults. I am printing PLA at 200℃ and a heated bed at 40℃. I have been playing with speeds around 200mm/s. Interestingly, printing at 0.1mm layers seems to just work - on the Makerbot you normally print at 0.2mm layers and use 0.1mm for "fine" detail, but that causes stringing. On this printer you can go to 0.05mm if you want (not tried it yet).

I'll post more when I get the Turbo version, and may do some side by side printing with the Makerbot.

However, I thought I would try a good test. This is with s/w and printer I only got last night. I don't actually have a front door key for the house at the moment (I use my own front door to my office here with electronic lock), but I ask my son to send me a photo of his key from his iPhone. He did. Working just from that one (slightly blury) photo, 15 minutes and 10 seconds later, I was opening the door with a 3D printed key. The actual print took 12 minutes, after a few minutes rendering the OpenSCAD 3D model and then slicing and transferring on SD card. I was able to "read" the depths from the photo first time. This is with an ABS high security lock ( happen to have a few of the tiny magnets lying around). I am pondering what locks to get for the house next :-) 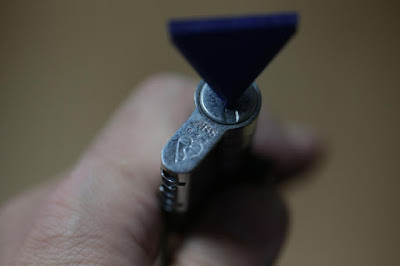