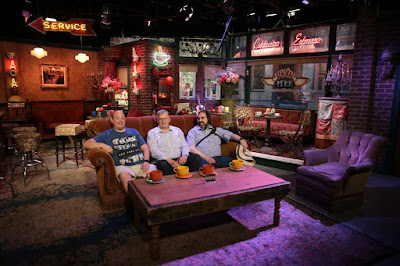 I have been pondering the meaning of "friends"...

Of course, the first thing I have to say is that just because the above picture has my friends Mike and Simon does not mean anything in any sort of ranking of friends, it is just that I have that picture of the three of us on the "friends" couch in a studio in LA (well, maybe that does say something). That said, they are two of my best friends and have been for many years.

But I was pondering the different sorts of friends we have. Over the years I have had many friends, and perhaps a key aspect of such friendship is that we do things socially as well as in other contexts. People you meet for a meal, or a drink, at the very least.

I have had many "work friends" that I have met socially, been to their houses, met their kids, etc, but the second I left the job and town in which I worked with them we did not keep in touch. It is strange that can happen, both ways around, and is not like we hate each other, just the social and work interaction is no longer there... In some cases, meeting now, after decades, would be strange and awkward.

There are friends I have made due to proximity in terms of where I live, but that is not actually that many people. I expect historically the local community was far more important than in the information age in which we now live. I doubt count any direct neighbours as "friends" especially, sorry.

There are friends I have made due to a social proximity as they are friends of relatives or other friends. I have a few of those. I am, of course, friends with all my kids partners. This is a sort of half way between the relatives you cannot pick and the friends you can. Sort of friends by proxy almost. Sorry if that sounds bad to some. I am happy to say I am friends with you all, obviously. Would I have met you and been friends if not for my kids - maybe not. That is not saying anything bad about you in any way. Friendship can only happen by proximity and exposure and interaction.

There are friends from work, and their indirect friends. There are friends I meet due to work, like those that attend LINX and LONAP meetings and so on. Many I would call friends. Many I rarely meet, especially out of this contexts.

There are friends on the Internet, some of which I have never even met. That is where things get interesting in many ways - the web of friends transcending any locale these days.

There are friends from some weird historical connection that are still there somehow. Friends that happened for any of the above reasons but manage to persist.

Mike and Simon are a strange pair - I met via work, as customers, but I have met their families, stayed at their houses, and they have stayed at mine. We have met socially on many occasions. We interact most days, or at most weeks. I know they "have my back", I mean if I was like "Holy crap, shit hit fan, can you lend me £50k" then both would step up, and I would do the same for them, no questions asked. That said, it seems horrible putting a price on friendship as I just did, but in many ways it is a measure you can use.

But I have have a few friends I fail to keep in touch with as much as I should, who are as much friends as Mike and Simon if not for the long pause in communications and friendship.

Keeping up a friendship can be hard work, but a real friendship probably does not need "keeping up" that much, and in that respect I can count many other friends. some of which I have not gone to dinner with for years.

Of course the most interesting of friendships are those you have with your relatives, such as my kids. One of those we cannot avoid if we wanted to, and all want to make work as well as we can. Perhaps they are the best friends...
at November 07, 2017