Once again I got in to a long thread on the book of face, and so I thought I would consider my ideas on this and condense them down a little. The issue is this meme: 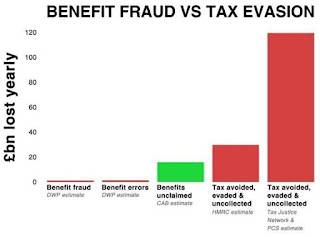 So what do I think they are trying to say? I think the message is that we are wasting resources chasing benefit fraud when we should be spending effort chasing tax evaders.

Sadly I see a lot of problems with this graph, and that comparison.

For a start, even if you assume the figures are right, the comparison is of apples and oranges. The resources spent chasing benefit fraud are not the same resources spent considering tax avoidance issues or chasing tax evasion. They are separate groups of people with separate roles. So why compare them - it is not like we can "steer the countries resources" from one to the other in any meaningful way. Ultimately things like benefit fraud are worth chasing if the amount saved by doing so is more than the cost of the people doing the chasing, simple equation! Things like changing laws to reduce tax avoidance is a matter for parliament - a group of people that do not spend any time chasing benefit fraudsters. So again, not a sensible comparison in any way at all.

But there are other issues, like what is the point of "benefits unclaimed" in this at all? It is green for some reason, perhaps because it should be below the line - the country and tax system do not "lose" as a result of benefits unclaimed. In fact they gain, seemingly a lot. If this is about where it is worth spending resources so as to improve the taxes collected (which seems to be the point of comparing with tax evasion), then it seems to be suggesting we spend some effort making benefits more complex and harder to claim (some would say that is exactly what is happening).

Then we have the big issue (which seems more controversial) of the amounts included in the tax evasion column. The heading is "tax evasion" but the columns say "avoided and evaded and uncollected". Well that is three very different issues. Uncollected is incompetence in HMRC that needs addressing. Evaded is illegal and needs work by HMRC to collect and/or prosecute. Avoided tax is legal and does not need any work by HMRC or the people that chase benefit fraud - it is a matter for the likes of parliament to consider changes to the laws on tax. We have no idea which of those there are represented or to what extent in those columns.

Also, to a large extent, estimating the amount of tax avoided is just silly. It is trying to work out what could have been paid if people had chosen to structure their business and tax affairs in a less sensible way. But why assume anyone would do that and how stupid do you have to assume they will be? As that will impact the figure. Do you go as far as assuming they won't but some duty free scotch next time they travel and include that tax in the figure?

And what avoidance do you include - there seems, from the Facebook debate, to be different types of tax avoidance, and some (like investing in an ISA, or buying duty free scotch) which are "OK" and some (like having an off shore company in a low tax country) which are apparently not OK. So which are included in the "avoided" figure? All? Some? Only those "morally wrong" somehow.

It is interesting how those that say there are some tax avoidance ideas that are "wrong" seem to pick those which are unavailable to themselves. Someone on PAYE is happy with the paying in to an ISA,  paying in to a pension, or even buying a bottle of scotch, but not with running an off shore company. It seems the "moral" choice here is "anything I could not do" (usually because doing so is simply too expensive).

One rather odd point came up, with an area of tax avoidance that is just in the "cannot do that myself" category for most people... My company does a lot of R&D, and we make an R&D tax claim. All correct and legal. It means we get a nicely reduced corporation tax bill. I know one company that pays no corporation tax as they do a lot of R&D, but still makes a healthy profit.

One person felt this was "reasonable" because we were doing the R&D anyway. Indeed, he specifically asked if we do R&D in order to reduce our tax bill.  It seems he would consider it "unreasonable" if we had chosen to do the R&D simply to save on tax.

Now that really does seem odd, as the whole point of the R&D tax savings is to encourage companies to do more R&D. The tax system is set up on the assumption that businesses will change what they do so as to reduce tax - that they will invest more in R&D so as to be able to make this tax claim.

Yet that very action is seen by some as "unreasonable".

I struggle to see how the tax system, or anyone, can assume companies will somehow not create off shore companies, and so on, if legal to do so, but will assume that companies will invest more in R&D if it saves tax. Both done to save tax in a legal way.

Indeed company directors are meant to act in the interests of the members of the company (shareholders) and so have an obligation to do what is in their best interests, legally.

But basically, the graph is a pile of shit, and makes no meaningful comparison of anything.
at November 08, 2017