Playing cards getting out of hand now

It has to be said that when I get started on some project (or "side quest") I do tend to get a tad carried away, and playing cards is no different. The card printing company asked if I wanted a job! We have printed samples and some quantity runs of half a dozen types of deck so far.

First off, the card making system that allows you to pick from hundreds of thousands of different decks (here) has been extended somewhat already. See below.

If anyone wants to have these card designs printed, I'd recommend Ivory Graphics. My customising site can produce print ready artwork and instructions on ordering. I have to say the quality of printing is pretty damn good.

I took a close up of the King of Diamonds, and blew it up and still it is hard to see the dots on the print screen. I have no idea what resolution this is, but it is really quite impressive.

It totally justifies making vector based artwork for the cards in the first place.
So, the recently added options are :-

A relatively simple change was to make the indices larger, but obviously that meant making the pips and court card images smaller to fit. They look nicer with a box round the pips as well.

I did not know this was a thing, but apparently it is. The Clubs and Diamond being greyed out, presumably to avoid mistakes. Easy enough to do.

I have seen this done in various ways. It always bugged me that cards are not symmetric layout of pips (e.g. the 7) let along symmetric pips where possible (e.g. the 6). But obviously cards with odd numbers of pips need something special for the odd one. What I have done is cut the pip and have a jagged line between the two halves. Initially I did not do for diamonds as not necessary, but they looked out of place.

What was also fun was how to mix with "All pips same way up", which I decided to make all the pips the combined up/down version - looks weird!

This was totally new to me - I played bridge a bit in school but I had no idea that bridge clubs don't just shuffle a deck and deal! 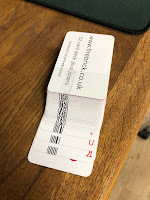 What they do is deal the deck on computer in advance and then have a machine deal out the hands. This means you can all play the same hand over several games meaning nobody has the luck of the deal as a reason for winning!

I am amazed, to be honest. But this is apparently a big thing and has been for a long time. Long enough for the patent to be running out in 1½ years or so. For now, to my surprise, I find that we can simply buy a licence for €0.10 per deck which is cheap enough to do things properly if we ever sponsor a bridge club.

Initially I did a simple diamond pattern back, but I also played around with a marked back using position of little triangles. However, I actually liked the back design so have made a static (non marked) symmetric version of the back - it will be on the next packs of A&A cards.

Amazingly we have given away well over 100 packs of cards now. More coming next week.

Another of the I never knew this was a thing cases, a four colour deck. Again, pretty easy option, though I did have to work out interactions with other features like "ghost deck".

Obviously I have been watching too much Stargate, as I also added Alteran (Ancient) character indices as an option.
Print ready artwork

As I've been working with Ivory Graphics and they seem like good guys, I have also made it so the form allows you to prepare complete print ready artwork for a whole deck. It takes a while to make so gets emailed, but includes instructions on how to order real cards!

The initial decks we got were simply packed in a cello wrapper with gold tear out strip. However, I decided to give it a go designing a box, and it turns out to be quite easy. They have a template as PDF which inkscape can simply import and I can simply save as a PDF to send back to them. They look really good! 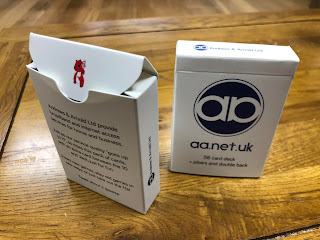 I was quite intrigued by some of the other packs of cards from Europe. Many of the cards I had been playing with were US based and had different styles of court cards, but these cards I looked at are clearly based on the very same original designs. But there are occasional minor differences, apart from obviously that they have been redrawn.

I was also surprised to see commercial cards that were badly done like this Queen of Spades with the pip over the crown! Even so,  and ignoring for a moment that the older cards were mirrored images for six of the court cards, the same features exist in the detail of the card. 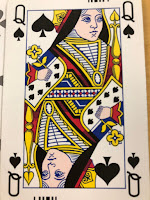 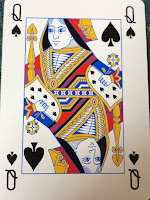