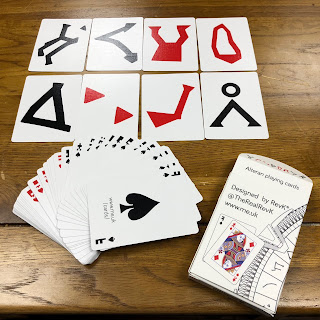 I finally had them printed! Just 2 decks for my own use, but they have come out just as I expected.

It will be fun playing with these on my next holiday.

Basically, it is a normal 52 card deck, but with Alteran characters for the indices, plus 8 "jokers" that are the gate address from Atlantis as dialled from Earth.

I'd love to sell them, but I am waiting for MGM to confirm if any licensing is needed (if so, I doubt it would be viable). I have not used clips or stills from the films or series, just the gate and glyphs from wikimedia commons (with a credit). I think I understand correctly that this CC licence allows commercial use like this.

The inspiration for the jokers is, of course, series 3, episode 6, of Atlantis "The Real World" where Dr. Elizabeth Weir has been invaded by nanites and thinks she is back on Earth in a mental hospital.

She deals a game of patience (solitaire) but the face up cards are the gate address for Atlantis from Earth (with two glyphs swapped for no apparent reason). It is a classic scene, and one that can now be reproduced with these cards:-