Stranger key on my keyboard! 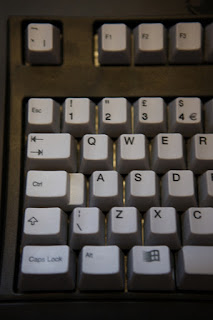 Well, after ordering a new keyboard a while ago and having one of those strange double glazing keys on it, next time I ordered a keyboard I picked "linux" from the options.

I was expecting that maybe I would get a penguin or "super" or some such on the key in question.

Imagine my surprise when the keyboard arrived with the same strange key as before, but with caps lock and left control reversed, as well as escape and tilda reversed.

What is especially strange is the reversals are not just printing, but electrically as well. I thought (perhaps wrongly) that the key codes used on keyboards normally mapped their actual position not their function. That is why you have to tell the computer the keyboard layout you have. So swapping the actual key codes as well as the graphics was rather odd, IMHO.

ESC swapped with ~ I can just about cope with, but as the key tops swap nicely, I just needed a bit of xmodmap to swap them back...

I agree CAPS LOCK is the most useless key ever, but I cannot see the point of moving it to the left CTRL key position, and I just cannot get used to that. So I want to swap back functionally even if the key tops will not interchange.

Well, using xmodmap as above is fine for these keys as well, except the CAPS LOCK and CONTROL aspects stay where it is! I eventually found that apart from renaming the keys I have to change attributes attached to the keys. First remove them :-

Then do the remapping...

Then add the attributes back again...

But still - how do I get rid of this strange key that is not a penguin for some reason!
at October 29, 2011