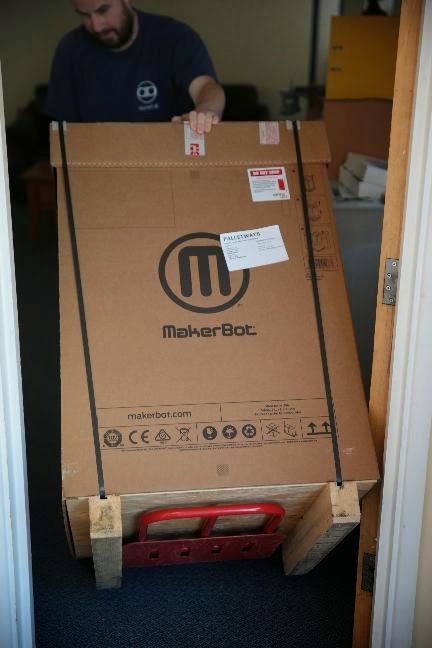 The new Z18 arrived yesterday, an impressive looking bit of kit, even came on a pallet! It is big!

It looks well made. The packaging was good and it was easy to get going. We did a small test print, which seemed to work. All well so far.

We then installed the s/w on a Mac, and it could not see the printer on the network. Using a USB cable we could see it and upgrade the firmware. This then left us with the "Extrude not attached" constantly. After turning off and on, disconnecting and reconnecting the extruder, and so on, we eventually upgrade the firmware again (to same version) and finally it was working and extruder showed as attached.

So we printed something. It was thing 6274 Lego Brio cross piece. It said it would be 8 hours, which is a long job. Printing lego tends to be slow due to the design.

While it was printing I thought it would be a good idea to compare the old Replicator 2, so printed the same job, using the same Makerbot desktop s/w in the Mac, and the same "standard" settings 0.2mm with raft and 10% infill.

First big problem with Z18. The Replicator 2 finished in 6 hours 24, but the Z18 took 7 hours 56. That is massively slower for the same print resolution. I actually checked, and the head speed settings are the same.

That means the new 5th generation Makerbot printers are 25% slower than the previous generation!!

They don't tell you that on the web site!

But when we looked at the print, things were even worse. The Z18 has printed a total mess! This is using genuine Makerbot PLA.

Now, I'll check with the suppliers and Makerbot to see what they suggest, but at the moment, it is likely to be going back!

Update: Looks like changing the feed tube to go above the extruder guard rather than below may have helped a bit, but still not usable. This also means you can no longer put the lid on. Waiting on Makerbot response.
Posted by RevK at 09:49:00