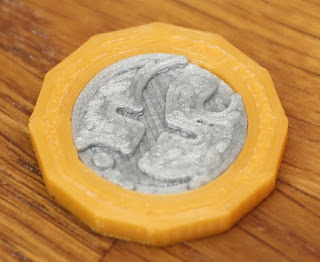 The new £1 coin comes out today!

It has a lot of nice security features, making it hard to copy. Obviously not impossible to copy, but that is not what is needed. What is needed is something that it is not economical to copy.

All but one of these "features" are explained. They are quite clever, from micro writing to a lenticular feature that appears too change an image depending on the angle (described as "like a hologram").

But there has always been listed this one "special" security feature to make forgeries detectable.

The problem is that it appears to be "secret".

Firstly, it is a concern that they have to keep it secret. That suggests that if it was not secret then a forger could reproduce it. That makes it "security by obscurity" which never works. If a forger could not reproduce it even if they knew the secret, then why keep it a secret?

Secondly, how is anyone supposed to check the coin is not forged if they do not know what this secret security feature is. It may as well not be there if people cannot actually test it.

Who thought any sort of "secret" security feature could possibly be a good idea?!?

And as if to prove a point: The secret is out!