Why did I make a blog?

If you actually go back to the first post, you will see the initial reason for making a blog.

Simple as that - I was fuming at the stupidity of BT, or as I put it a lot "our favourite telco". There were so many things that wound me up. I was posting comments about this on the company status pages at the time, and that seemed rather unprofessional for the company to be doing. It is a sign that the company was growing up that I felt that way, and we are now 20 years old next month - definitely old enough to buy alcohol for the party. I called it RevK's Rants for that very reason.

What I have found is the the blog is a perfect medium for parking emotional issues. In general, I am not that emotional - well - I say that, but what I mean is that I am not the sort of person to burst in to tears over almost anything. I do get emotional - cross - angry - over anything I see as wrong or injustice - but crying my eyes out is not me... Or so I would have said.

What I found is that if I put my issues in a blog and told that small portion of the world that bothered to read my blog, I would feel I had "dealt" with the issue enough to calm down. Until I had a blog I would lose sleep over things, and now I do not (as much). If anyone needs therapy - I would suggest a blog. I suspect in times gone by it would have been a diary people would suggest, which is just a blog that nobody else reads!

Over time I found it also gave me a chance to show off some of the things I was doing. The 3D printing stuff is a lot of showing off. That was also therapeutic!

But I have also had the chance to be educational. That I find really rewarding, when I can explain something on the blog and people appreciate that I have done so.

Occasionally I can be controversial, and the comments can be very useful to help me understand what other people think. It works both ways.

Over all, the blog has been beneficial to my mood in many ways, and benefited some others too. I hope to continue to blog for years to come.

But today I find myself in a new state of mind, one I have not had before I do not think, one of extreme sadness. My eyes are sore from crying all day. And I wonder if posting this blog post will make even a small dent for me. It may not, but it is worth a try, and I hope it does. I hope it does not make my readers too sad. I am really sad for my daughter and her partner. This is where I am usually the last to have any empathy, but today I can think of little else.

Everyone we know, and the whole family have been very supportive of her.

It is all over this little man... 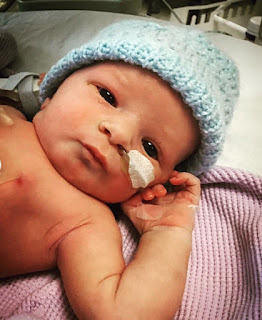 Thomas Arthur, born yesterday morning. He was doing well - a healthy baby boy until last night when he and his mum were rushed to another hospital in London. Doctors worked all night, and this morning he died.

A stillbirth would have been devastating, but this seems so much worse for all of us, and especially my daughter. There is nothing I can say and nothing I can do to make anything better for her. Only time can help, and then only so much. I am so proud of her.

He will be remembered, even though I never got to meet him myself.

Apologies for typos - but proof reading when you cannot see through tears is not easy.

P.S. Thank you all for messages via various media, I have not replied to them all as I don't know what to say, but thank you. It is the next day, and it was not just a bad dream, and I am at a loss as to what to do now.
at March 12, 2017

Email ThisBlogThis!Share to TwitterShare to FacebookShare to Pinterest
Labels: FAMILY