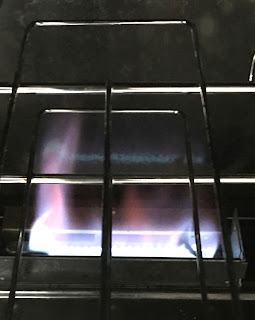 (Update: Sorry to my wife. According to all of my five kids I am being tactless, again, which I know I can be. But some interesting comments have been made on this post. Perhaps the best is don't argue with the cook!)


Blazing row with my wife, again. This time over gas oven.

She is adamant that you start by setting the oven to max (gas mark 9) first and then down to what you want, (e.g. gas mark 6) to get it to temperature quicker, and apparently the man that came to repair the oven today said the same.

I am sorry, but the gas oven, like most devices using a thermostat, has a binary output (on or off). It is either a low level pilot or full blast. That is it. I am sure some systems work differently, but most thermostats are binary output, as that works, and is simple.

Of course, being a bit scientific, I went and checked. I would not want to be stating fact when I am wrong. I turned oven on to gas mark 1, door open. There is an initial low temperature state where output is in "low" pilot light, but after a few seconds it goes to the expected full blast. Changing dial to gas mark 9 does not change level of blast. There clearly are only the two options, pilot/low and full blast. That is it, as expected.

This simple fact about the way thermostats work in so many systems, whether the car air-con, the house air-con, the cooker, whatever, is apparently beyond my wife's comprehension. I don't know why, she is not stupid.

She is apparently sick of me lecturing her! Well, duh, if she finally got this really simple fact of life I would stop doing so. That is sort of how lecturing people when they are wrong on something works! You keep doing it until it sinks in. Well, I think that is the rule. It is so frustrating. As I tried to explain, black is black and white is white and if she was insisting that was not the case I would lecture her until she accepted it. This is not different. It is a simple fact of life, not opinion, not something that is unknown, is is so simple.

Why is this hard?

First off, yes, absolutely, I may be wrong in some (or all) aspects of my understanding of how this thermostat works in this case. Having played around with the oven a bit (not done proper tests with thermocouples and the smart meter measuring gas flow yet) I think I am not, but I may be. Even so, that does not mean what she is saying is right. However, if I am wrong, I am prepared to listen to reasoned arguments and references, and change my view and learn something. I'll even apologise.

What makes it so frustrating is that I have something to back my point of view - I can explain how a thermostat works, and why there is a binary output, and so on. The other side of the argument comes down to "stop lecturing me" rather than any explanation of why I might be wrong. I might indeed be wrong, but that is not the way to have any rational discussion, and that is what winds me up, sorry.

Why would I be wrong? Well, firstly, I don't like to say how something works without knowing how it works. I am sure that happens some times, when I have deduced how something works but got it wrong, but obviously I don't like to be wrong - who does? I am pretty sure I dismantled something with a thermostat in it when I was a kid - so I saw, first hand, how it works. In most cases it is the same today, I am sure, where the output is binary - on or off. This means in the case of an oven you do run at "full blast" until you get to temperature and then stop, and the cycle on/off in some way. Interestingly someone has suggested that this may not be the case, so I am hoping some time to test that. It was suggested there is a linear control near temperature. I can believe that, but it seems unnecessarily complicated and expensive. It is also suggested that the oven will not be fully at the right temperature when the thermostat in one point thinks it is. Even so, getting to temperature by setting a wrong and higher temperature and letting it then cool is likely to take longer over all, so my overall conclusion would be right. The idea of being hotter before opening the door or putting in a cold container is an interesting one, maybe that has some merit.

In light of the comments so far, I feel I am quite correct in saying that putting it up to 9 to get to temperature fasters is just silly, a meme, and old wives tale, and not needed. Even so, I may have something to learn about the details of how it does work, and will see if I can find the time to test and learn something.