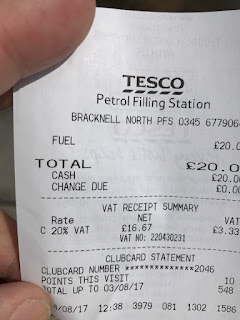 As I posted recently, we had an issue at Tesco where the till froze/crashed after authorising a contactless card. This created a slight deadlock where we could see, and show, that the card clearly authorised - it shows on the banking app as such, but Tesco insist it has "not gone through". The result is we left our details and left without paying (again).

The simple view as a layman is easy - you can see that the "money has been taken". You have paid, end of story, why would you pay again?

Having worked with cards before, and being reasonably up to speed on how such things work (often more so that people I speak in banks, sadly), I can see what has happened. The way card payments work is there is an immediate "authorisation", and later (usually of the order or two working days) the payment is settled, which matches up with the authorisation.

Once upon a time card statements arrived on paper every month, and so this delay did not really matter. With on-line banking it is a lot more obvious. The bank will "earmark" the funds when they see the authorisation, making the balance seem lower, waiting for the settlement. These days banks are letting you see the "pending transactions". Monzo go further and make it look like the transaction has happened, only in small print does it say "pending".

However, this settlement only works if the till / back-end system - has the transaction details. If the authorisation happens and then the details are lost, then they cannot settle the transaction.

In this case, what happened?

It is now three days later, the groceries at the same store (also on a Monzo card) have settled, i.e. no longer showing as "pending" on the app. The £20 for petrol still shows as pending. Experience is that this will show as a £20 credit some time next week if not settled, and at this point, after 3 days, it is not likely to be settled.

So we owe Tesco £20. I went in this morning, queued at customer services, paid the £20. However, get this, the man in front of me in the queue was in basically the same situation and was there paying £50. Apparently he paid on some other card, and from what I can gather he even got a receipt, but Tesco contacted him to say it had "not gone through" and can he come in and pay.

Is this a huge co-incidence, or a sign that Tesco (at least that Tesco/garage) have a serious issue?

One interesting part of the debate is where things stood legally. Had we committed any sort of offence or breach of contract or what?

Firstly in terms of crime, an issue some people raised on irc (concerned we would get a visit from the police) - I am pretty confident on this, albeit not a lawyer, that there has to be some intent for there to be theft. It is clear we intended to pay - the fact we have the bank confirming the card was authorised shows we presented a valid payment card with sufficient funds. So any dispute from there on in is pretty much a civil / contract matter.

As for contracts - I doubt there is a formal written contract and even if there was one, we would not have seen, read, and agreed it. There is, however, a normal process for making payment which means presenting the card to the contactless terminal, and seeing that it did in fact read and authorise the payment. There is not normally a receipt in many shops. So one can argue that all of the actions normally require for payment were done by us, we did our bit, so not in any way in breach.

One person argued that refusing to "try again" showed intent not to pay, well, again, the discussion at the time was that we would be happy to pay if this does not go through, but we won't know that for a few days, will we? So again, clear intent to pay, just not intent to pay twice. It is also likely that trying again would mean £40 is reduced from the balance with £20 coming back a week later, inconveniencing us when we did nothing wrong. I am told that this is not always the case and some POS systems can indicate that this is an attempt to re-authorise, but no idea if Tesco tills can do that or if Monzo cope with that.

I think, contractually, the situation created an impasse that could not be resolved without waiting a few days to see if the payment is settled. Tesco could not prove that they would not submit the transaction for payment. We could not prove that they would. All we could prove is we did try to pay, and there is an authorisation, so if Tesco did have the details to settle the payment, or recovered them later, then Tesco could take the money. I therefore think the remedy for we we opted was spot on: waiting and seeing if the payment goes through, and then, if necessary (as we did) paying Tesco what is due at a later date.

What annoys me is they took around 25 minutes of hassling my wife for that to happen.

I also think that a judge would take a very much "average man in the street" view, which would be "it says on the phone bank app that I paid, so I have every right to assume I have paid". Who knows?!

We did not get a receipt, but that is normal for contactless anyway in many places.

I do however find it rather interesting if the other person in the queue got a receipt, as he says. I was always under the impression that a receipt is a pretty important contractual document. It confirms receipt of payment. You cannot have people saying later "it did not go through", else that makes the bit of paper totally meaningless.
at August 04, 2017