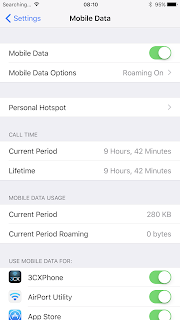 I saw an article yesterday, well, someone read it to my whilst I was reading my Ada book, on EU mobile roaming.

The theory is that the "free" roaming in EU will continue after brexit because the Great Repeal Bill will maintain all the existing EU laws as UK laws when we leave, including the requirement to do the roaming at no extra cost.

First off, it may be that the deals the mobile operates have will indeed continue, and maybe we will retain the "free" roaming in some form.

However, a UK law cannot really enforce that. Right now the operators in UK and mainland Europe are all subject to the EU law saying they have to allow the roaming like this. When we leave the EU, those mainland Europe operators will NO LONGER be subject to that requirement when it comes to UK mobile operators roaming to EU as UK will not be in EU. So those operators can go back to charging UK operators a small fortune for roaming calls, texts, and data.

If the UK tells UK operators they have to allow roaming at same price as UK and the foreign operators charge a lot for roaming, what will happen? Someone loses out, or roaming becomes no longer an option. More likely is the operators which you can use when roaming get to be few and far between.

I also suspect that EU law retained in UK law will not necessarily force UK operators to allow EU phone users to roam to UK. After all, they are foreigners, and all that... So even the logic of reciprocal arrangements does not necessarily hold true.

Somehow the person writing the article thought UK law could bind all of these EU phone companies to play nice after we have left the EU - do people not think these things through?
at August 11, 2017