Today it seems that Amber Rudd, Home Secretary, has once again embarrassed herself by showing her total lack of knowledge of the Internet, encryption, and even logic. 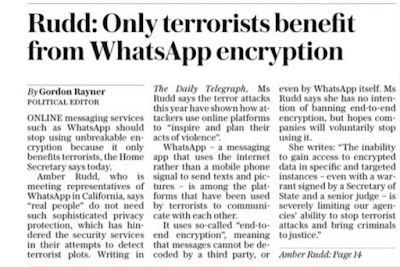 Even if we accepted her arguments that encryption helps terrorists (as do white vans, the M4, and even sandwiches), the step of making secure communications systems weaker does not make logical sense.

If one makes WhatsApp, and similar apps, less secure for "real people" - does that stop terrorists using encryption? Well, no, obviously. Apart from using other common apps (only one app needs to actually do "end to end encryption" to be "useful") they can make there own - maths exists and so does encryption. Heck, you can buy books on it! Apparently terrorists groups already have apps for this - will Amber Rudd go and talk to ISIS and ask for back doors in their apps?

So the logic of actually making these commonly used apps less secure for everyone in order to help catch terrorists just makes no sense.

We then have the condescending and dangerous idea that "real people" do not need secure communications. "Real people" have every reason to keep communications private for lots of (legal) reasons. Oddly, MPs are reported as using WhatsApp simply because it is so secure. One can only conclude that MPs are not "real people" - something many have suspected for some time.

Either she is batshit insane, or stupid (in my personal opinion) or there is a motive to spy on everyone, not just terrorists and criminal. I am not actually sure which applies here. I hope people see how illogical these ideas are and treat them with the contempt they deserve. You do not have to understand encryption to realise this.

Why do we put up with such an embarrassing public figure?

And, to remind people, encryption can be done using pen and paper and dice... No apps needed!