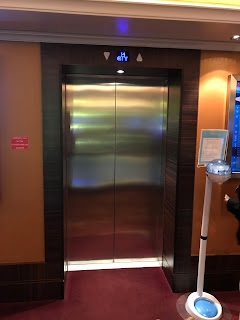 We all encounter lifts (elevators) from time to time. On a cruise ship they are a way of life - almost anywhere you go is on another deck and some are many decks away - so unless you fancy a lot of going up and down stairs you use lifts.

The lifts always seem slow, and the reason, I have concluded, is not the lifts but idiots.

I just had this, and made the mistake of arguing with the bunch of special people that got on the lift.

I commented, and they said... yeh, go up then down.

As I tried to explain, this means they pressed UP on the call buttons (presumably as well as DOWN), so stopped me on my journey. If they had not, it would have gone to 17 and I would get out, and it would have gone down to 16 and let them on. They had delayed their journey by the time to open doors, get on, close doors, all on deck 16 on the way up, for no reason. And, obviously, going back down the lift would again stop at deck 16 for, well, them to get on! They delayed their journey at least this much and delayed mine as well.

They were all "chill, you are on holiday", and even commented that the lifts were terrible and slow. I tried to explain that this was primarily because of idiots like them delaying everyone's journey. It fell on deaf ears.

Of course they may even have been quicker if another of the three lifts reached them before mine returned, but worst case they delayed mine, theirs, and every other person on that down going lift, by at least 30 seconds and for no good reason.

It is not the only case, and seems to happen a lot - Earlier I was going up in a lift, and twice, as the doors closed, people dived in to go down, before the lift could move off.

If I was making a lift controller I'd be tempted to simple not accept buttons below the floor on a up going lift, and the converse, so they have to press them again when the lift changes to down going, just to cause them as much hassle as they caused other people. Arrrrg. As a software engineer I'd love to find an "answer" to this, but cannot think of a proper one. (Some interesting ideas in the comments below).

I have seen many other examples even in only one day on this cruise. So often the lifts stop on floors for no reason, and it is almost certainly people doing exactly this sort of stupid thing.

There is however one special case I had never even considered! Sharon (in our party) used the logic that, even though we wanted to go up, as the lift was above us she would press DOWN to, err, make it come down... That is one I doubt anyone could program for, sorry.