As I say, I have just returned from a 7 day family cruise holiday on the Norwegian Epic - it was awesome!

OK, sarcasm over, it had challenges as I posted, but it is worth trying to put all of the niggles behind you and have fun. Sadly, for me, the biggest downer of the whole cruise was that my wife was ill, and no amount of insurance claim for her ticket really changes that. So let's move on and look at what was good.

One of the biggest plus points of a cruise is the reliability of the "floating hotel" you get. It is the consistency that comes with you as you go from country to country. Whatever conditions you find, you can always go back to the room and have the butler get you a pepperoni pizza, and sleep in a reasonably comfortable bed.

If I was trying to visit Italy, France, and Spain in a week by any other means I would have to keep packing and unpacking, would have a range of hotels and quality of hotels, and it would be a lot of hard work. A cruise solves that. For that alone I recommend them as a concept (even if not recommending NCL's craziness).

This trip we had some bad weather, not that bad, but enough to make sleeping harder. It was only a couple of nights. Usually it is plain sailing.

We booked in to the Haven, which is the top two decks on the Norwegian Epic. As Sandra was not with us I agreed to swap rooms with Mikey and Victoria, so they had the two bedroom cabin with Mikey's mum and I was on my own. It was almost certainly the right thing to do, but meant I could not set up a laptop, as no table, or living room even. Eventually I ended up with a chair in the bathroom by the bath and the laptop on a make-up table - but I looked good :-) 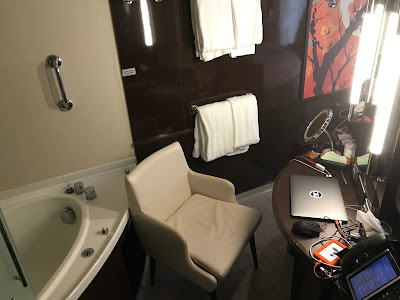 One of the nice things in Haven (more so on my last cruise) is the Butler. He would do things when you asked, like getting Pizza, or breakfast, or even just clearing the table. OK I only asked him to clear the table on the last day as an excuse to get him to the room and give him a $100 tip.

Cruises have some sea days (not docking at a port) but we only had one at the start. The rest we docked at a port. Mostly this is dock in morning and leave in evening, but some are funny, like Palma, which docked in afternoon. You can go ashore, look around, and come back, as you need. Unlike airports, the process is pretty informal getting off and on the ship.

What was really fun, and made my day massively, was when we docked in Rome. We decided not to bother with an excursion (we have all done Rome before).

I left the Haven area as some guests were being shown around, as Rome is a port for starting a 7 day cruise in its own right. They were having trouble getting in ti the Haven area. I moaned that the mag card readers on the door were crap, and walked on to the deck 18 "Posh club", noting oddly some laughter behind me. I thought little more of it.

Then, we went down to eat in the Haven restaurant, and had a table, and again some laughter. Massive double take - my mate Mike, and wife and two kids, were sat there on the next table. They were the ones I had just walked passed!

It was great to meet them all again. Mike had this booked months ago, kept it quiet, and even turned off iPhone location sharing just in case. They had been in Rome a couple of days before. That really made my day. Thank you all for sharing our holiday. They now have two more days and disembark in Rome.

Obviously, in any port, there will be a range of excursions. All bookable with your concierge, or via the app on the phone. These are a tad tricky - they are often more expensive and less flexible than doing it yourself, but they are simple.

We did a tour of Herculaneum. It was hot. The tour guide thought he was funny and laboured every point way too long. He could have reduced each five minute ramble to 30 seconds, and the whole tour be less than an hour rather than two. I gave up and went off taking video rather than melt any longer. However it was really interesting. I have made a video of my walking around and used his first talk (before we even got in to the ruins) as the sound track...

Sadly I left my phone on the bus. That was fun. We called it, and managed to get the driver to bring back to the port. After a lot of calls and messing around we met him and I got the phone back (gave him a €20 tip) and managed to re-board with 8 minutes to spare!!! Close call.

The ship also has a lot on it - not just a pool and slides and climbing wall and so on, but also bars, and restaurants, and shops. It is big. The Haven has exclusive areas, a separate pool and hot tubs. Not as good as your own private hot tub, and actually, this time, I did not even get my swimming shorts out of my case. Of course there are sun decks, and Haven on the Epic has a private sun deck, no children, and a bar... The "posh club". 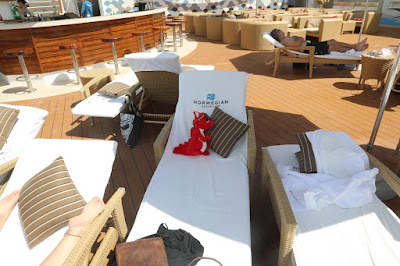 There are a lot of restaurants, and the food is mostly good. There are some extremes though! The Haven restaurant was pretentious as hell, so much so I found nothing on the menu I would eat - that is until I found they had a children's menu :-) The other extreme is the Garden Cafe which is, well, amazing. It is crazy, with thousands of people milling around. It is a buffet, and they have all sorts, pizza, chips, indian, chinese, the lots, all just buffet style. We did have a snack there a couple of times, and one time Mike's family had dinner there at peak time, and said it was a total zoo! Don't get me wrong, it is totally "down to earth" food and not at all pretentious, the opposite. So mostly food I like, but if you can go to the specialty restaurants I would rather...

The steaks in Cagney's were really good - we went there (all 8 of us) for Mikey's birthday. The Italian place was really good too.

Oddly the chinese style restaurant, which was really quite good, was one of the complementary ones, though we (in Haven) had priority seating.

It was strange - we had lots of bars and could drink as much as we liked of normal alcoholic drinks, all included in the price, but I probably drank a fraction of what I do at home! I drank some cocktails, which were fun.

There are, of course, lots of shops. Oddly, if you want diamonds, or watches, you are sorted. Loads of them!

The shops were slightly odd - they insist, even at sea, on charging 21% Spanish VAT, but they also show prices without VAT and have a "no refunds" policy, neither of which fit with being subject to EU law. The prices are also a joke, they start at 40% off the marked price when not having a 50% off sale the next day. However, you can get some nice gifts, which I did.

Well, like any casino, a way to lose money, and all that matters is how quickly you lose it. I lost $100 very quickly on four spins of roulette. Mike lost $100 with him, Mikey and Victoria, playing blackjack, but took nearly an hour to do it. Well done Victoria splitting two 3's, getting 7's on each, and then getting aces on each... But end of day the money went. Was entertainment, so worth every penny.

I took a lot of the time to read more of my Programming in Ada 2012 book. I will do an Ada blog some time when I have finished. I managed about a ¼ of the 1000 pages. Maybe I was strange, being in the bar, in the posh club, in the shade (obviously) in a shirt, reading an Ada book and drinking a cocktail. But that is me...
at August 13, 2017