The Star Trek view of the future

I am so lucky to have grown up in the time that I did - I watched Star Trek (albeit re-runs of the originals) and all the sequels. There are many social and political points one can make about the original Star Trek, but for me the most interesting is the technology. 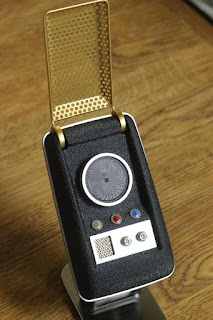 The communicator is perhaps the biggest of these.

It was a huge step! In the day, there were basically no mobile communications devices like it. Yes, radios existed, as did telephones, but "proper" mobile phones did not.

But the big thing for me is "user interface" and how massively Star Trek underestimated that. These days we are very much aware that the user interface is a logical thing, a control interface to a system, even if that system then makes things happen remotely.

Back in the 60's things were different. For a start the controls themselves were different. You would not have the touch screens we have now, but actual physical switches and buttons. But the disconnect from the controls and the actions was not a big thing, back then. A switch or a button would directly control a thing - one step removed from a lever working something on a steam engine.

I feel there is a certain irony in the modern communicator I have, where the right hand button is actually a 5 way button (left/right/up/down/push) input, as I suspect that in the 60's that would be a tricky device to make, it would turn or push and that would be it. These days the inputs are far more visual, touch screen controls or even virtual 3D controls by some sort of cameras or scanners. The fact this replica communicator has such physical controls is pretty much old-school, even now!

Even the idea of lights that may, in one light, change colour was a tad odd, apart from, maybe, the "alert light" being red, or yellow! One is reminded of red dwarf and "We'll have to change the bulb" for a specific type (colour) or alert.

I find it amazing how some things are so far out out our reach, like transporters, and some are so much within our reach they look wrong. The idea of almost any user interface using some form of physical button or lever or switch is almost inconceivable these days. The concept that they could be any different was inconceivable in the 60's.

You have to be careful with those buttons though :-)

My Star Trek Communicator, which talks bluetooth to my iPhone, allows me to ask questions of the world, verbally, to Siri, and get answers in a way that Gene Roddenberry could not have imagined back then.

Even now the world of physical buttons, and levers, and switches and sliders continue on in a virtual world, where the user interface we all use in so many ways maps on to those low level historical concepts so much, even now.

In this respect, the fact that user interface metaphors rely on older styles of input devices, is, in some ways, odd. Why do they need to for the next generation that never actually switches a switch or dialled a rotary dial phone? These old, and increasingly obsolete concepts continue for a long time to come...