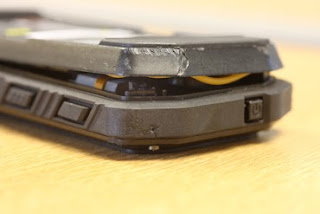 My daughter's school ban the kids from taking mobile phones into the school, it seems.

This may seem sensible to some. It seems a tad harsh to me. I am not even sure of the legality of it (or more importantly the legality of any enforcement actions such as confiscating phones), but that is a separate matter.

The problem is that all the kids take phones in to school - teenagers will. They keep them off/silent in class, etc, and occasionally they are confiscated and later returned. The school clearly know this happens so it seems silly having a ban.

The problem is that bullies can steal phones, break phones (see picture) and do what they like to phones and the owner feels they are unable to report it for fear of getting detention for breaking the school rules.

Seems a somewhat unintended side effect!

The problem has parallels in more normal life. Making something illegal does not stop it, but makes it impossible to police properly or for people who are mistreated to come forward.