A chance to compare 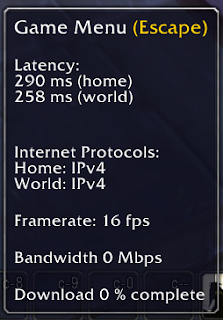 I used to use ADSL lines at home, but these days I have A&A Ethernet services, i.e. actual fibre to the building. It has nice latency and works well. So I do not get a chance to try real broadband lines very often.

However, visiting relatives, I do get a chance to. Obviously many of them have A&A broadband lines, and, well, "just work".

What has been interesting today is that I am at a relative who has a typical cable based broadband service. I won't say who's, but it is interesting to see what most people put up with.

They have a cable modem with wifi, and a computer they connect directly (which is off). I am the only person using the Internet in the house, and using wifi from my mac, in the same room as the router.

What surprised me is that I noticed it being "sluggish" and a bit slow. I tried playing World of Warcraft and found that it had patches to download (as is often the case). It did manage 1MByte/s but after a few hundred MB it slowed a lot. It took ages to download the patch which was over 500MB. Apparently this is a "20Mb/s service" so should manage at least twice that sort of speed and maintain it. I know WoW patches can load way faster.

Then I tried playing. I had noticed already that just using irc via ssh was laggy. But WoW was showing anything from 400ms to over 1s latency. Almost as bad as playing in Rhodes. It was rather inconsistent though, and was down to under 300ms some of the time. Far from what I am used to.

I'll try and do a more direct comparison with an A&A line - perhaps after we install new broadband at this address in a few weeks. It is sometimes a surprise to see what people do put up with!

Update: I see we have DNS poisoning as well (directing NX domains to a web search page), and a lack of IPv6, and seems they do intercept the pirate bay (not that I use it, but was an interesting test).
at December 09, 2012