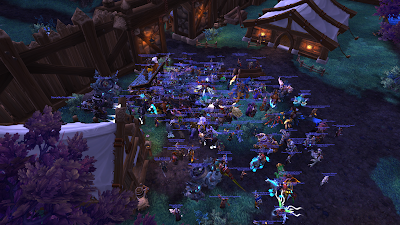 I appreciate it is not easy, I really do. It is not easy having so many users, and not easy launching any sort of software or service.

But Blizzard are not new to this - they have launched upgrades many times, and WoW has been going 10 years. They should know how to make it work properly.

They have run public beta servers. They have multiple realms/servers so that the whole system should scale well. Not so many users on each server at once, etc.

The vast majority of the "work" is in the client - the server has to manage the NPCs and interactions, and quests and stuff, but the client does all the fancy graphics.

They collect a lot of money from subscriptions and so really should be able to cope, in my humble opinion.

To explain the picture here to those that don't play, or have not tried the expansion yet. This location is my garrison. It is a new feature where each player has their own "home town" almost, with a separate garrison hearthstone. The garrison is an "instance" that is for that player. Instances are not new - they are used for dungeons where a group of players play together and independently from other players to complete a quest.

Here, lots of people have come to their garrison - it is key to progression of many of the quests and some of the new features with garrison "followers". Everyone expects to find a very quite place with a few NPCs and some buildings they have constructed, and the next "quest giver" that will move them on to the next stage.

However, the system is broken, and not for the first time today (we are talking working hours in UK and much of EU, so should not be busy, yet!). Yes, I was off because of air-con install, so have been playing! So what has happened is that everyone is in one generic prototype garrison which does not have what they need, just lots of people.

It has also gone buggy where people cannot even dismount, or mount, or even logout properly.

The chaos is kind of special, as there are constantly new people arriving, wondering why the place is full. Most assume the quest giver is there but surrounded by so many people that they cannot see it, and hence are calling people idiots and asking people to dismount so that they are not in the way.

Earlier today this happened, and the effect was that after some waiting, suddenly, I moved to my own garrison and for me everyone vanished. This time, it is basically broken, so more and more people arrive, unable to progress a chain of quests and kind of stuck waiting, and yelling at each other!

P.S. Game just exited as I type.
P.P.S I guess they rebooted it - did not help - everyone re-appearing one by one in same state!

Update: It worked, I was able to progress at the garrison, only to hit this saying the same!! 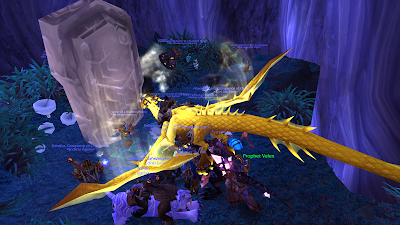 19:00 And still a picture of chaos, with basic game play screwed as well in some places 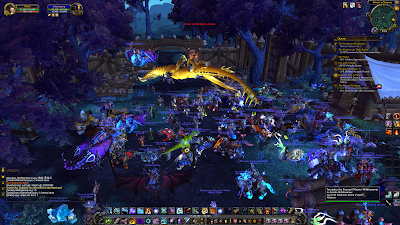