I really am starting to lose my rag with @Barclays

I still do personal and business banking with Barclays, but have several other accounts now "just in case".

Tip: I recommend people have spare accounts and cards, and companies like Monzo and Starling are excellent ways to do this. Put £100 or so in there for safe keeping just in case your own bank screws up.

This may be seen as slightly 1st world problems, but it is just getting so frustrating.

Last week I decided to give all the kids some money for Christmas. Generous dad that I am. They all have shiny new Monzo current accounts so I could simply do a fast payment from my Barclays on-line banking to them.

I take security seriously, and one thing I did was make absolutely sure I had the correct account details. Copy and paste is your friend here. The Monzo app can share bank details over iMessage at the click of a button and no re-typing. I can copy/paste that to set up new payees. I sent £1 to each and confirmed it arrived, and at the right child. I say child, the youngest is 22 this year!

Four payments worked, the fifth is blocked! I get a text saying they will send me a text ?!? Then a text saying reply (to a 5 digit code). Sadly, I know my comms are special, but I cannot text a 5 digit code. I was hoping they would call - they have done in the past - with an automation that asks a couple of silly questions using DTMF replies. I could have coped with that. But nothing.

At this point I have 4 kids saying "thanks dad" on the group chat and one saying "WTF? Why not me?". Explaining the bank issue still makes them wonder, I think. So not happy. So I called Barclays.

It took over 70 minutes to sort, and only because I ended up saying "look, either you believe I am me and so approve this, or you don't and I go find a real bank from tomorrow!". So sorted, money transferred, yay! I made him stay on call until I confirmed it had arrived.

Next day, call from anonymous number saying they need to talk to me about the transaction. Well, I spent 70 minutes on the phone to Barclays fraud already, and I told them so. I was not doing it again. So they blocked my on-line banking. WTF? By the way, if you call from an anonymous number, I reserve the right to SHOUT AT YOU! Take note, Barclays. I may even swear.

Thankfully we have quite a good business banking team, and as this meant I could not get to business accounts either, so they sorted it. Very annoying.

So we come to yesterday...

I am planning to make a moderately expensive purchase, on a card. I won't go in to details, but suffice to say I am really confident Barclays would block it. That, in itself, is a sad state of affairs. So a new plan...

I have a Starling Bank account now. They confirm they have no limit on card spending and it would be fine. So I try to transfer the money to Starling. I had previously set up the beneficiary and sent a test payment and checked it was all correct. Same copy/paste trick. The payment comes up saying:-

OK, pain in the arse. Does not say contact fraud team. Does not say much, but does say scheduled for 14th, so good. Just delayed. No text. No call. No message. Nothing.

This morning nothing. No record of the transaction. Not showing as rejected on the tracker. Nothing. So I move the money out of that account and send a message on on-line banking explaining what I had done and asking for an explanation. No reply yet.

Barclays: You need to show "pending" or "delayed" transactions and a status. It is totally broken for them to not show anywhere on your system! If there was fraud, the real account holder could not see there were pending fraudulent payments and query them. It could also easily lead to people duplicating payments (I have done that in the past when I did not see the "delayed" message). Really, fix this now.

Anyway, what next, well suddenly on-line banking is not working. WTF?

Again, I contacted the business team. I was not amused. The account manager put me on a conference call with the on-line team. They faffed about a lot - even though she validated that she identified me (and that was a lot of faff, for good security reasons) they then wanted to further identify me with pin sentry crap, which I did. The account manager was not amused with that - she had done her job and they messed about for no reason.

They ask about the transaction and if it was genuine? I explain it was, and how annoyed I am that it did not happen. And that they can cancel it now, as I'll transfer by other means (BACS direct submission, takes 2 days but just works). So good, all identified and confirmed.

She says I now have to speak to their fraud team to re-enable on-line banking. WTF?

I just confirmed NO FRAUD, it was not FRAUD. IT WAS ME! So WTF would I have to speak to a fraud team? No, they were not budging. The account manager is still on the call!

At this point I lose my rag (how unlike me?), rattle off how many hundreds of thousands are sat in the business account and say I want that in cash at the branch tomorrow morning. i.e. I have had it with Barclays. I have paid my mortgage off now, and can easily break all ties with Barclays at the drop of a hat if I have to, both myself and the business. The "account switching" stuff means that even those few people paying us (A&A) by BACS will not be inconvenienced if we start banking elsewhere as the payments get redirected.

Surprisingly (ha!) the account manager steps in rather sharpish at that point and suggests that I can hang up and she will sort it all. Well done to her, 10 minutes later, she has.

Who are they protecting?

As you may know I get very frustrated by this crap, and I had this on the call I had with the fraud dept, that they say they are protecting me! They even had the cheek to say "you had a lot of fraud last year". No, Barclays had one big fraud last year accepting a card holder not present, no address check, old, replaced, card number in a foreign auction house without questions, and gave me hassle over it. I had no fraud!

Also, from news stories, if I did have fraud - if someone convinced me to send money to a bogus account, the bank would not protect me. They would say they did what I asked, and tough.

If any of this actually protected me and not the bank I would be a lot happier about it. It does not.

Who are Monzo and Starling?

Monzo and Starling are some new banks. Both are now proper banks, and very similar way of working. Both embrace mobile banking apps as the primary way to interact with customers. Both tie to a card (MasterCard debit) as well. Both allow instant blocking of the card, and use on-line chat from the app to resolve issues. Both seem to work.

Monzo have aimed mainly at consumers, and have only just sorted their full banking licence. Starling seem a tad ahead of the game and have some things Monzo do not. Both have APIs and web hooks. Monzo web hooks seem better so far, as Starling not sending payer account details.

We are looking at a business account with Starling as soon as they start doing them - the payment services API looks good, and do have the data we need. It will allow some new A&A services I am sure.

In some ways I found Starling a tad more slick, but then I started with Monzo when it was just out of alpha, and experimental and not even a full bank yet. So maybe unfair to Monzo. I actually liked the anonymous card from Monzo - they should allow a card with any name on it, or none.

With Starling I got the app from the apple app store, and went through the steps. All very simple and easy. Like Monzo a photo of ID and short video recording. They were slightly slicker in some of that than Monzo, but very close.

Unlike Monzo, at that point, I had an account number and a simple click through to add to Apple Pay. Within minutes of downloading the app I had a working Apple Pay on my phone and even an overdraft limit (which I have no plans to use). That was impressive!

The card arrived today, a couple of days after applying, and even that was slick... 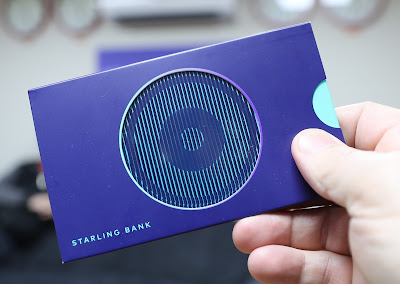 Pull the tab and you get the card... 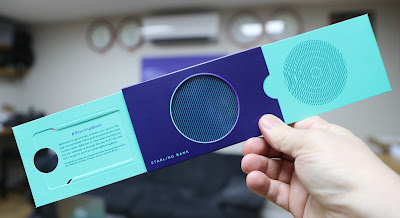 Very nice. I may have to look in to how they do that for A&A router cards :-)

I have not had a simpler bank account opening since I was a student in a university branch, and in those days the slick thing was handing you a temporary cheque book (un-named) on your new account, on the spot.

I have given the Barclays team the challenge of providing a decent API for inbound fast payments. We'll see. If they do, maybe I stay using them.

Right now, it is really close, and one more stupidity from Barclays and we leave them...
Posted by RevK at 18:18:00