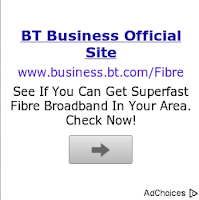 I said I would comment on adverts on the blog.

Basically, I think I'll leave them. Those that don't like them can ignore them or adblock them, and some people do. No problem, and they are not in the rss feed either. The ads make a few pence some days and much more others. Only tens of pounds a month though. I think the issue is that few people click on the adverts (understandably).

There is, however, something vaguely gratifying that when I rant about BT, that BT are actually paying me to put adverts on my blog next to the rant about them.