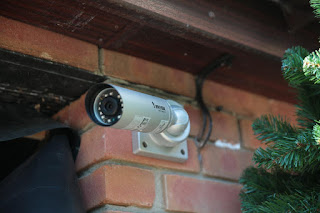 We have CCTV at the house, we have had for some time.

The main motivation was some years ago when someone came up our dead-end road all the way to the top of the hill where we are, in a van, in the middle of the night, and nicked five bicycles off the drive. I was pissed with that. Ever since, I have taken security and visible deterrent somewhat seriously, even more so since the office was robbed last year. There have been other incidents in the road since, and police have had several occasions to ask us to see my CCTV.

We have a sign about CCTV and very visible cameras. It has always been "personal use" and so should be exempt from any DPA issues, but a ruling has changed that (the judge decided it matters if the CCTV shows the road outside of your property regardless of "usage" of the CCTV images being personal use - a daft ruling IMHO). So now we need DPA registration for CCTV at the house even! However, I suspect I'll just make the company data controller and sort it all under that as we pay for DPA registration anyway. May as well follow the rules even is stupid.

Anyway, more on the technical side of things, as times have changed over the years.

First I had a single camera, a Mobotix camera which was IP, PoE, two cameras (one day, one night) and could record to an NFS mount. This has some issues including the fact that day/night was a time schedule and not light levels, but also that it was not geared up for linux usage. I could see images but not video. It did have a built in SIP speaker phone which was fun. It looked the part (which is key for deterrent). They have better models now, it seems.

Moving on, a year ago, when I started the man-cave project, we had just put cameras in the office after the robbery. These were the cheap 4 camera "HD" security things you can buy for a few hundred quid. Cheap and cheerful, simple to install, and work. Downside is they are crappy PAL analogue cameras so low resolution (in spite of the "HD" label), but the recording and playback sort of work, they have working night vision, and a simple iPhone app allows me to see the video on the cameras 4 at a time easily. I got some for home, but they spent most of the year being squirrel cams in the loft! Having finally started work on the garage I installed them, and found that three had gone rather purple. The office cameras are not fairing much better, so in hindsight a pretty crappy investment and in need of replacing at home and office.

Times have moved on, and some very promising cameras are made by ubiquiti. The prices are very good. The cameras work with (free) recording system rather than as standalone systems. I will try these and post more later as they seem like a good option. Notably they do both 720p and 1080p cameras.

However, what I have at the house is not those, but four vivotek cameras based on a recommendation. These are good, sturdy, external cameras with self contained web servers, including https and IPv6. There are many apps that can show the cameras on a phone, which is good (though the free ones just froze on me). The fittings and housing are good solid metal and look very sturdy - I like the fact you can install with wires behind them and no visible wiring. 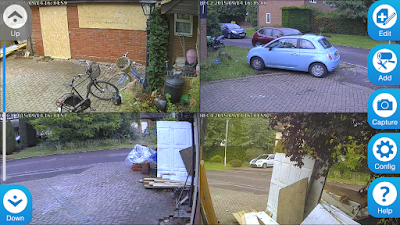 But I need a DVR for them. There are some free ones, and I will be trying them, but what I got was a vivotek DVR as that seemed an obvious simple choice. This is where it all falls down rather. The DVR does not work at all with a Mac using safari or firefox - it is useless! You cannot even work most of the settings. The recording only works via http and not https from the cameras - fine in my case as on same network. It does have an 8 port PoE switch to power the cameras directly, which is one redeeming feature. It also has no fans.

There is an iPhone app to work with it, but it is really crap. I am also wary that I had to set up an "account" to use it. The video playback is "possible" but hard work. I cannot even find a rewind option, you have to play one camera at a time from a date/time, and that is it. Not totally unusable, but if free s/w is better then that makes it a stupid choice. Watch this space.

All that said, the video quality of the actual cameras is good, and the night vision is excellent. It is 1280x800 so "HD". 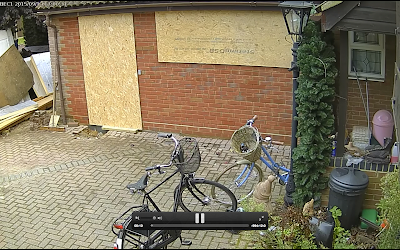 They are obviously there to be a deterrent and to provide evidence if there is an "incident", so need to be good, and look good. I think they will do for that, but I do have to look at upgrading the office. These vivotek cameras are twice the price of the ubiquiti cameras of similar resolution, so we will see how that goes when we get one to try.
at September 14, 2015