Today was not as expected - the decorator put a base coat of paint on the walls, and they started work on the internal doors, and then a debate started!

The debate was over the ceiling. Paul, the builder, had originally talked of putting a skim of plaster on it, but then decided it would be OK. However, when fitting the lights today it became very obvious how uneven it was, and how thin and badly fitted the plaster board really was. The decorator felt that it would need a skim of plasterboard, but it was apparent that there were no "noggins" and it was really thin plasterboard that was just nailed up and coming off the nails in places, so no way it would hold up.

Finally, my wife explained that she had said all along that the ceiling needed re-doing, and that was the decision. So, lights down, AP down, smoke alarm down, ceiling down - messy.

Obviously, had this been the plan, then this would have been one of the very first things that was done. It would also have made all the cabling in the loft a heck of a lot easier. 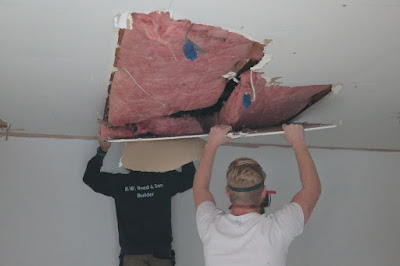 I found a few things that fell out of the loft, including a portable VHS recorder/player! 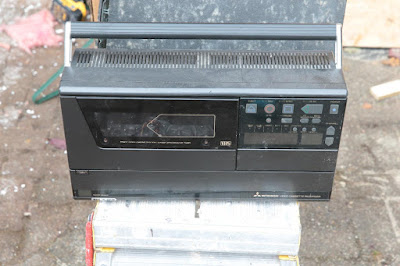 Now, the new ceiling gets interesting. Building regs come in to play again and a shitload of insulation is needed, well, maybe. They confirmed with the building inspector how to do this, and are putting Celotex and then some "NASA stuff" which looks like a mix of tin foil and bubble wrap, and an air gap. Sounds complicated, but they were quick to get the Cellotex up and the rest will happen in the morning followed by a skim of plaster. 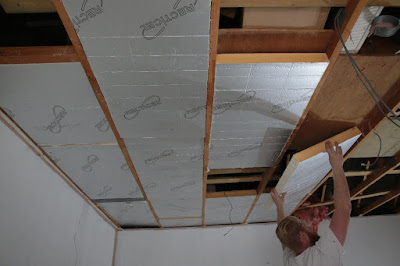 However, before that was done, Lee, the electrician was able to clip cables up neatly and once again measure where the lights were going (having fitted them once already today). We also managed to terminate all of the cat6 (he terminated, I tested) and get the mains sockets all live. The lights were live too, this morning! He also found a fault in my lighting wiring upstairs, and a few other bits. Lee seems like a good electrician and does really neat work even in the loft where nobody would see it. I have some of the neatest structured cabling I have seen!


Indeed, there was only the one deliberate mistake, which the cable tester spotted, and on port 13 no less :-) 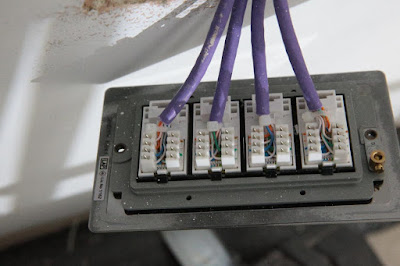 However, with all of this work on the ceiling, I had a cunning plan, and twisted Paul's arm to mess with the fibres. He was somewhat worried about it, bit we pulled it off. We managed to remove the whole rack back that was bolted to the wall, with the fibre tube and patch lead in situ, and push it up through the rafters now that the ceiling was removed, twist it around, and fix it in to the roof space, freeing up a big chunk of wall! Well done Paul! 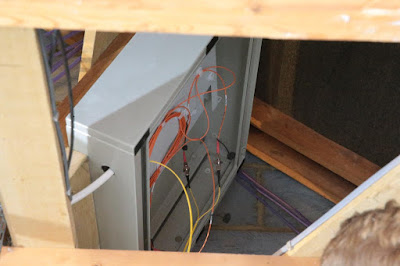 So, tomorrow we may get back to where we were today - finish ceiling and skim, do internal door, a few minor bits for the electrician, then the next day we can start on the internal stuff (worktops, shelves, etc). A setback, but the end result will be good.
at September 15, 2015