I did this as a video first (here) and decided to make a blog separately. I am still not sure which medium is best, and I suspect it is worth trying to do things both ways as some people prefer one and some people prefer another. This is not a bad example to try as it is a totally trivial subject matter. 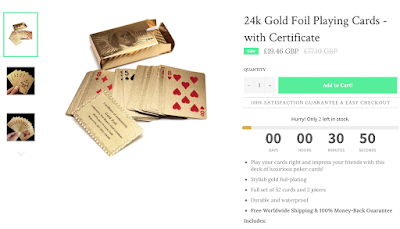 It all started when I saw some click bait on Facebook selling "24k Gold Foil Playing Cards - with Certificate", and they looked like fun. The web site was typical, constantly an offer which was just about to expire, only a few cards left, reduced price from £77.10 to only £19.46, but now!

Obviously this is a transparent and annoying ploy, and also, if you read more, it is a US site selling in $ and shipping in 2 to 4 weeks (if you are lucky).

So I googled, and amazon sell the same cards, and several similar ones for much less. Indeed, one identical pack for £1.81!

Now, I was under no illusion what I was buying. I spent a couple more pounds for a pack in a presentation box even.
I was not disappointed - what I received was utter tatt!

Start with the box, with the label (actually some sort of sticky backed foil) stuck on at an angle - a sure sign of a quality product. 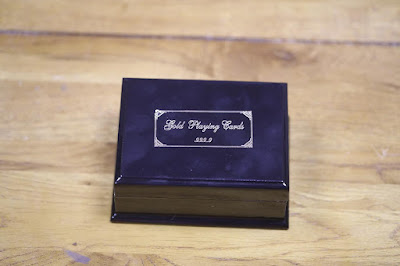 Then, opening the box, we have some glue along the bottom, messy. Then comes the box, which was not stuck together as the double sided tape had come undone. Even when stuck down it is tacky. There is a certificate, claiming 99.9% pure 24K gold foil. I expect that could be true but a few atoms thick :-) 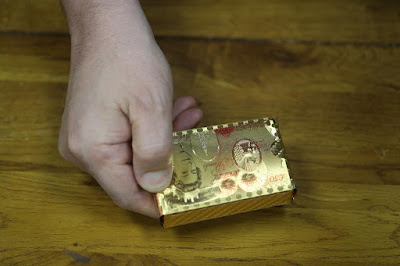 The box is made of the same plastic as the cards, and that made it hard to actually open. I had to prize it open with my pen knife. 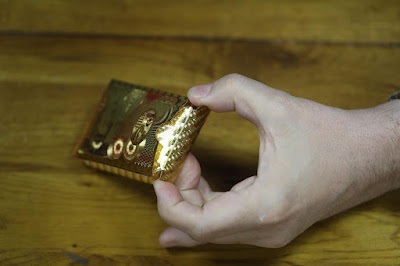 The cards themselves, in this case, have a rather distorted image of a £50 note. The one in that advert was a 100 dollar bill, and probably looks as bad to an American. 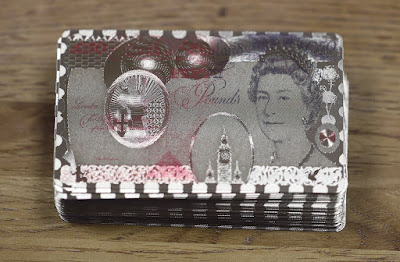 The cards themselves look quite nice. 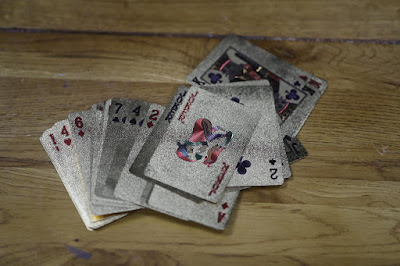 The cards clearly have the embossing/foil printed per card, as you can see in the background for the picture cards. The printing is, however, a tad misaligned, with the digits looking like they have a bit of a shadow. 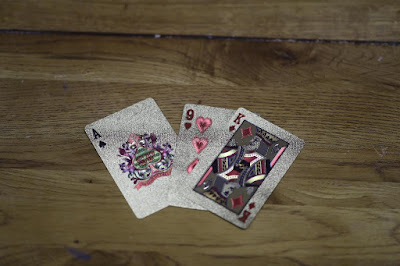 Overall, tacky as expected, but quite fun, and for under £2 you cannot really argue. Not sure I would ever give as a gift, but we'll try playing with them. There is a danger the gold will scratch and leave distinctive wear marks on the backs, which may be a bit of a flaw, but I don't know yet.

A lesson in not following click-bait :-)

As for whether this should be a blog post or a video - you decide. The blog post has ended up as a narrative with a series of pictures, but you can read at your own pace.