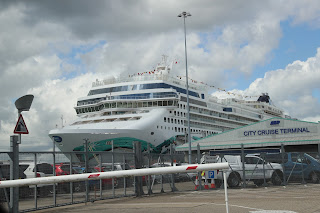 As you may have gathered, myself and two mates are on a cruise, and this is day 1.

The stateroom is amazing, and when I am not on slow satellite latency internet I'll upload some videos and pictures.

Getting on board was not quite as it should be. They can definitely improve.

We have tickets in the "Haven" section, which is the premium part of the ship (upper decks) and is meant to have a priority boarding. As you can imagine, a dock where several thousand people are boarding is busy and lots of slow moving queues. They have security checks like airports, and check-in.

So we started on the dock asking someone official looking if there was a separate queue for Haven/priority. They said they had no clue, but they checked with someone else and took us through another door to the head of the queue as it entered the building. This was a good start as the queue went on some way outside. However, there was a long queue in the building still.

We persisted in that queue, and were joined by three other people, also with Haven tickets. I hasten to add that there was no obvious signage for any priority boarding or Haven queues or anything. After some time in that queue, and the check-in desk breaking so we were stalled, one of the other group asked another official looking person. Again the person was not sure, but escorted us to the front of that queue so we were next through security, when it started working again.

Having gone through security there is a massive room full of queue for the check-in desks. We asked, and were told that there was not any priority boarding, so persisted in that a bit until we saw someone from this other group managing to be escorted to the other end of the room. So again we asked someone. This time we were taken to the front of that main check-in queue and checked in.

The check-in person was nice, and helpful, and again did not know of priority boarding at all, but checked us in and said "Oh, it says you are VIP". She asked someone else for help, and apparently we should have been at the other end anyway for a priority checking, a separate Haven lounge, and so on. She was told to escort us there to the concierge.

Finally, in the right place, the concierge was much more on the ball, and we have a separate waiting area and then went in to board the ship. But we spent maybe an hour in queues and asked about 5 people where we should go with nobody having any clue. I do not know if it is Southampton Docks at fault or Norwegian Cruise Line, but it was not really very good for what we paid. A simple sign to another entrance or a couple of signs inside, or just staff that had a clue would have helped. It was clear we were very much not alone in this situation, and it was rather embarrassing at each point having someone escort us past a chunk of the queue instead of to the right place to start with.

However, now on the ship, and if you can get one of these Haven staterooms, they are excellent. Apparently Priscilla Presley had this stateroom last week!

As for internet, yes, for $239 we can have one device WiFi/Internet for whole 8 days, which fits in well enough with the £200 refund from Thomas Cook. It even says "unlimited"! It is for one device, and only one device is connected to the wifi (all the rest are connected to it). Given this was sold as having "Free WiFi", I think that is only fair, to be honest. It works well enough at around 750ms. By the way, there is a now new alpha of FireBrick that is way better at doing DNS cache/relay when the latency is that high.

Also, as I found before on a cruise, if you have an iPhone then iMessage works when on ship's wifi even if you have not purchased any internet package. They try to sell you a $9.99 package to allow you to message and call between guests, which is a bit of a cheek when iMessage works anyway!

It is Simon's birthday today! There was meant to be a cake. No cake!

Anyway, off to a restaurant this evening.

I'd like to thank my lovely wife for packing my case, driving us all here, and making T-shirts for us especially. Not a single person we have met has heard of The Hitch Hikers Guide To The Galaxy, which is a shame... It is a good conversation starter. 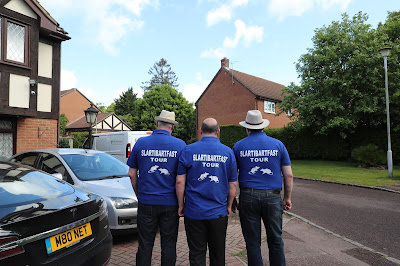