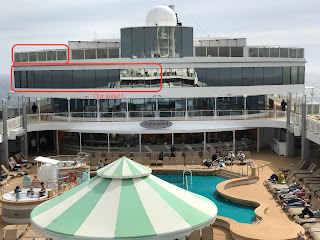 We had a nice meal last night - a Brazilian style restaurant with a red/green card on the table for whether you want more meat or not, and they come around with different meat on skewers.

The bed was comfortable (I always bring my own pillow). The only problem was the vibration from the engines appears to resonate a bit up here on deck 14, and something in my room was making a knocking noise most of the night. Even so, I managed to get some sleep. Sitting here at the table in the suite is like sitting on a washing machine, but the rest of the ship is calm. Very odd.

Bulter arrived with breakfast this morning (I brought my own marmite, as usual).

Today we are at sea, so a chance to work out what trips we want to take over the week. We think tomorrow we'll just go in to Stavanger town.

A bit more about the Internet access. First off, the "unlimited" does seem to be (in terms of volume). It seems I have thunderbird on this laptop set (as default) to sync folders, and I have a folder with a load of call recordings filed for Lenny, which is huge, and well, you can imagine the rest. I have changed the settings this morning, but not before we had downloaded over 3GB over the satellite. They do not seem to have shut down or complained. Certainly was not my intention to do that, and not exactly fair on other passengers.

The package can be moved between devices, but one device at a time, so you can log in from iPhone and close the session to the laptop, for example. That makes it a lot more flexible.

The actual wifi connection has some interesting restrictions. So far I see they seem to restrict DNS records, so no AAAA records returned by the look of it (so I expect tunnel over DNS won't work). They block some sites, seemingly by IP, such as youtube.com. They appear to even block IPsec though once it connected but did not pass data, which was odd. What is good news is they don't block L2TP. So I have may Mac doing IPsec over IPv6 over L2TP over IPv4 over ship's wifi over satellite... It works :-)

We went to the captain's drinks reception today, and met him briefly. We also got the chance to talk to some of the other passengers. Having a nice suite means you tend not to go out in the ship as much. What was quite amusing was the fact that several people came up to us and had a nice long chat because they had seen us in the Slartibartfast shirts on the dock! People still don't what HHGTTG is but they were interested to ask - a real conversation starter, so well done to my wife for coming up with the idea. Interesting people telling stories of other cruises and ships.

As it happens I am now somewhat knackered. I did not get as much sleep as I would have liked last night, and at 21:35 here I am going to call it a night whilst Simon and Mike go to a show. Shame, looks a nice show, but no point if I am not feeling up to it. My twisted ankle is starting to feel slightly better today too.