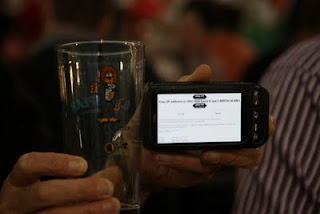 A beer festival with IPv6!

The Reading Beer Festival is under way. Seeing as we are doing some WiFi, I had to go along last night (some times this is a fun job).

We have not done much in the way of events yet, so it was a bit of an experiment. There are several more much busier days to go, but so far it is looking good. With thousands of people in a couple of tents we had no idea if that means dozens on thousands of people using the Internet. The good news is that most people were drinking beer and cider rather than using gadgets, so the answer is nearer the hundreds than thousands and so far it looks like it is all working as planned. 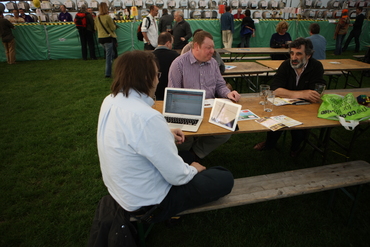 We have about 30Mb/s coming in to the site, with 2Mb/s uplink, and 3G backup. The Ruckus access point seems to be pretty good, and means we have 5GHz as well as more conventional 2.4GHz WiFi with 802.11a/b/g/n all working.

Judging from the DHCP server, we are seeing a lot of iPhones and Android phones and some PCs and all sorts. Mostly phones. A few iPads, which can in fact use the 5GHz.

I was able to use facetime to video-call with no problem, so looking good.

Interested in feedback from anyone that goes and tries the wifi.
at April 28, 2011